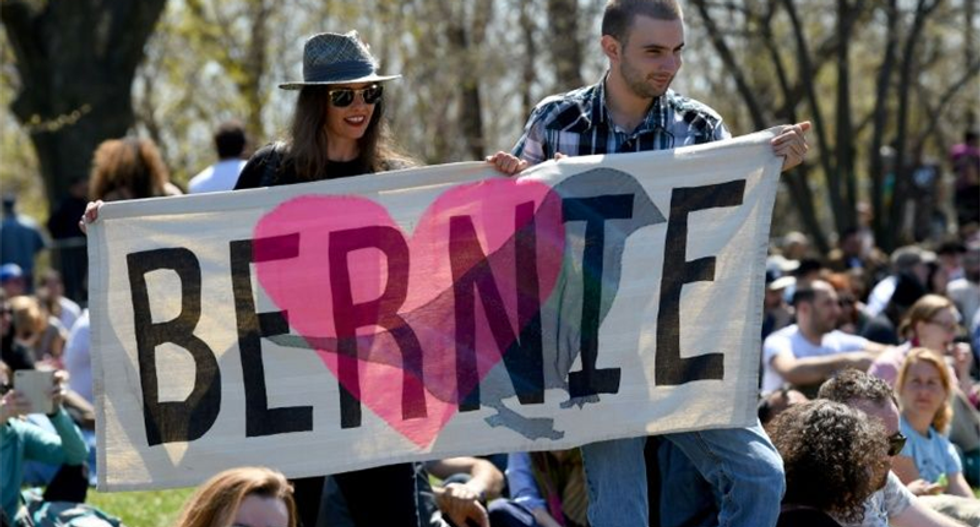 The overwhelmingly Democrat state votes Tuesday in its most decisive presidential primary in decades with Trump determined to fend off the prospect of a contested nomination for the Republican party and Sanders pinning Clinton into a tighter race than few ever imagined.

Trump, the Manhattan billionaire, needs to win the majority of the 95 Republican delegates up for grabs in the primary to increase his chances of clinching the party nomination before the July convention.

The 247 Democrat delegates in New York, plus 44 super-delegates, are likely to be won mostly by Clinton, giving the former secretary of state and New York senator an unassailable lead over Sanders.

Although nationwide polls give Clinton a lead of just 47-46 percent over her self-described democratic socialist rival, in New York she leads a whopping 53.5-41 percent, according to a RealClearPolitics poll average.

"I need you to come out and everybody you know to come out on Tuesday," Clinton told a cheering block party in Brooklyn's historically African-American neighborhood of Bedford-Stuyvesant.

She referenced her eight years as New York senator from 2001 to 2009 and gave a short version of her stump speech, highlighting calls for gun control and building on the legacy of Barack Obama.

"Vote in this primary, stay with me. Whoever they (the Republicans) nominate, I look forward to taking whoever it is on," she said to cheers and applause from several hundred people.

Back in New York from Los Angeles, where she attended a lavish fundraiser hosted by Hollywood heartthrob George Clooney, the former first lady embarked on a campaign whirlwind.

The 68-year-old Clinton whizzed through America's largest city to appear in upper Manhattan, Queens, the Bronx and set to finish with an LGBT event in Manhattan's West Village.

Trump, 69, made appearances on Staten Island, New York's most isolated borough, before heading off to tour his former boarding school and to lead a rally in Poughkeepsie in the Hudson Valley.

"The polls are so good," said the businessman, when asked why he had not campaigned more in New York City, where his name has been synonymous with money-making and real estate for decades.

"I really want to focus on areas where they know me but they don't know me as well," said Trump.

He leads the national Republican polls with 40 percent. Texas Senator Ted Cruz is on 30 percent and Ohio Governor John Kasich has 21 percent, according to a RealClearPolitics averages.

In New York, Trump commands a thumping home state lead at 52 percent, with Kasich and Cruz languishing at 22 and 17.8 percent respectively, alarming the Republican establishment opposed to his divisive, controversial campaign that has insulted women, Muslims and Mexicans.

On Saturday, Cruz picked up more delegates in his determination to chip away at Trump's lead, winning all 14 up for grabs at the Republican state convention in Wyoming.

The right-wing evangelical now has 553 delegates against 758 for Trump, according to CNN. A candidate needs 1,237 delegates to win the Republican presidential nomination.

Sanders, fresh from a visit to the Vatican, where he briefly met Pope Francis, is to address a giant rally in Brooklyn's Prospect Park.

Thousands, many of them young, gathered under the sun on a hot afternoon, hoping that the 74-year-old Brooklyn-born Vermont senator can pull a surprise win out of the bag on Tuesday.

"Some people think his dreams are impossible, but it just the beginning," said Kevin Clay, a 64-year-old retired electrician.

"Hillary is for Hillary; Bernie is for me, you, her and everybody."

Sanders has ripped into Clinton's ties to Wall Street and his call for campaign finance reform is a cornerstone of his campaign, which has galvanized millions of supporters across the country.

But he has been unable to pinpoint any decision that Clinton made that shows she favored banks because of donations she received.

"She voted for a bad bankruptcy legislation," Sanders told CNN. "But -- and whether that is a result of contributions from Wall Street or elsewhere -- you know, no one can say that," he admitted.

LIMA (Reuters) - Even as Peru's embattled president faces fresh corruption probes from prosecutors as well as an opposition-led Congress, some lawmakers are simultaneously aiming to take down his vice president in a separate bid to weaken him, sources told Reuters.