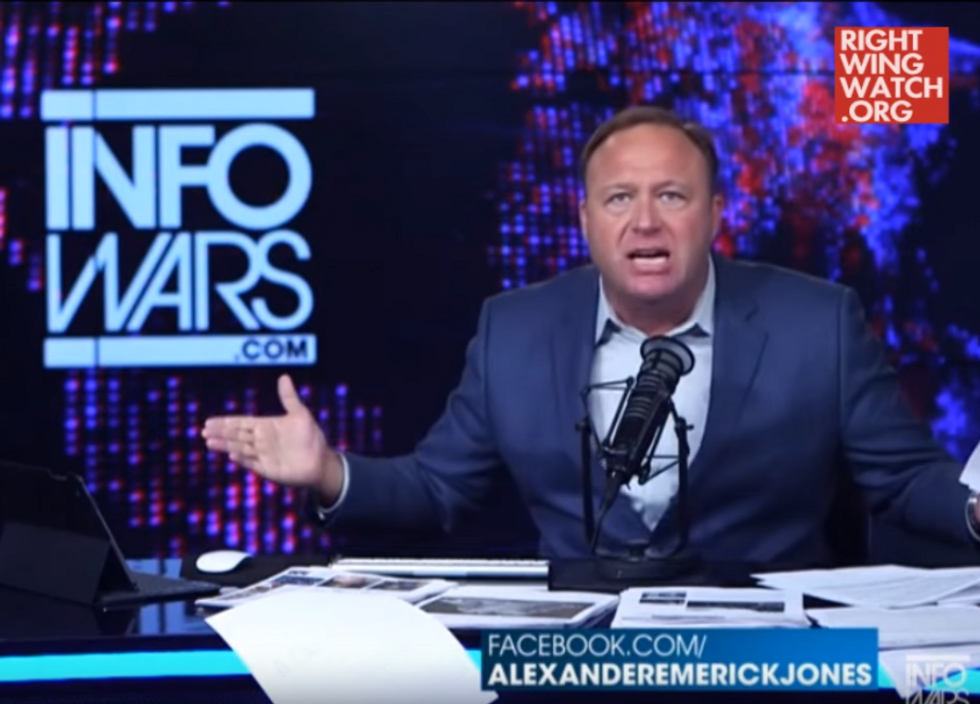 Trump supporter and conspiracy theorist Alex Jones is well known for saying a lot of things that have no basis whatsoever in reality. All the same, he still has the ability to surprise every now and then, and his latest tirade on Michelle Obama will probably make your jaw drop.

Right Wing Watch has posted a new clip of Jones talking about the reasons he thinks Michelle Obama is actually transgender. That in itself is pretty crazy, but then he goes off in an amazing new direction by suggesting that the first lady had Joan Rivers killed because she knew the truth about her dark secret.

“Don’t forget, the famous comedienne Joan Rivers said, ‘Of course everyone knows she’s a tranny,'" Jones says in the clip. "She’s dead serious, ‘She’s a man.’ Deader than a doornail in a routine operation where basically she had fire poured down her throat and was a fire-breathing goblin. Dead on arrival. Shoot your mouth off, honey, you will die."

Things don't get any less weird from there.

"I really think — her daughters don’t look like her — I really think this is some weird hoax they did again, just like he didn’t get sworn in on the Bible, it was the Quran," Jones continued. "All this weirdness, I mean, I used to laugh at this stuff, but man, it’s all about rubbing our noses in it. I think it’s all an arranged marriage, it’s all completely fake and it’s this big sick joke because he’s obsessed with transgender, just like some weird cult or something. I think Michelle Obama is a man. I really do. I really do. I believe it."

While it's possible that Jones really does believe it, keep in mind that he also believes that the government is trying to turn people gay as a form of population control, that the Air Force can create tornadoes to attack population centers, and that Harry Reid engineered a "false flag" shooting of police officers in Las Vegas.

Check out the full video of Jones' latest insane theory below.