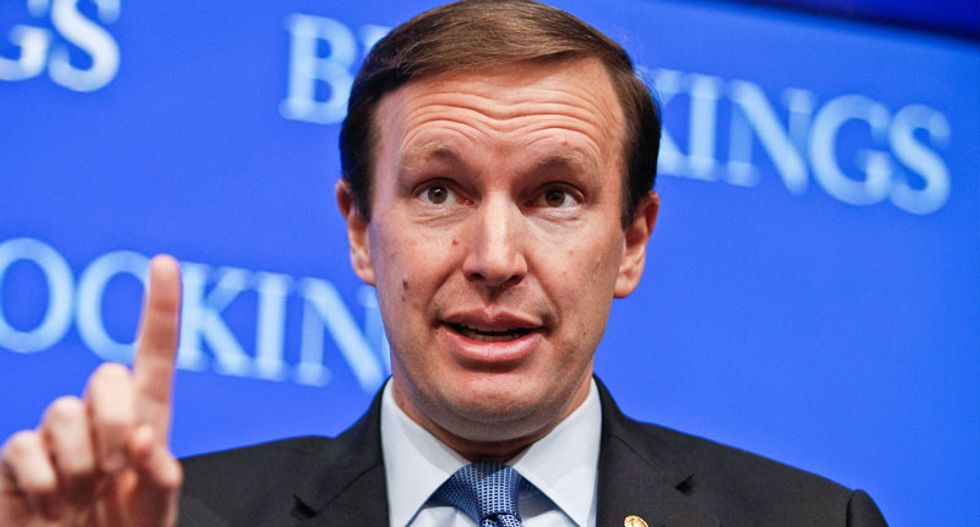 Senate Democrats claimed a small victory early Thursday, forcing the US upper house to consider legislation to help keep guns out of the hands of terrorism suspects.

The move, which could break a years-long logjam on gun control, follows demands for action after the weekend massacre of 49 people at a gay nightclub in Florida.

Democrats took to the floor of the Republican-controlled Senate Wednesday to launch a procedural obstruction, known as a filibuster, to press colleagues to accept so-called "no-fly no buy" legislation.

Under it, people on watch lists or no-fly lists would be barred from buying firearms.

The filibuster was led by Senator Chris Murphy of Connecticut, where a 2012 school shooting left 20 children dead.

"I'm at my wits' end," said Murphy, as he began on Wednesday morning his hours-long takeover.

"I'm going to remain on this floor until we get some signal, some sign that we can come together."

"I am proud to announce that after 14+ hours on the floor, we will have a vote on closing the terror gap & universal background checks," Murphy wrote.

The chamber's Republican and Democratic leaders agreed "on a path forward to get votes ... on a measure to assure that those on the terrorist watch list do not get guns," as well as an amendment that would expand background checks to sales at gun shows and on the internet, Murphy said.

The filibuster "captured the attention of our nation," Booker said early Thursday.

"How many of our children's dreams must be destroyed by gun violence before we do the common-sense things that we agree on to begin to shrink those numbers?" he asked.

A Senate measure that would have stopped FBI terror suspects from buying firearms and explosives failed in December, with every Senate Republican but one voting in opposition.

Some Republicans appear to be reconsidering, including congressman Bob Dold, who is locked in a tough re-election fight in Illinois.

"Thoughts and prayers are not enough," Dold said Tuesday on the House floor. "It's time for action."

Republican Toomey, whose bill to expand gun sale background checks failed in 2013 and again in 2015, worked with Democrats in a bid to break the gridlock.

On Wednesday Democratic Senator Dianne Feinstein introduced a measure that would give the US attorney general authority to block the sale of guns or explosives to known or suspected terrorists.

A US government report shows that known or suspected terrorists have passed background checks for gun sales more than 90 percent of the time since 2004.

Republicans largely oppose legislation that would deny weapons to people on such lists, arguing it would infringe on the Second Amendment rights of everyday Americans, including those who may have been placed unfairly on suspect lists.

Studies however show a large majority of Americans support such limits.

Presumptive Republican presidential nominee Donald Trump on Wednesday said he hoped to address the terror watch list gun ban -- a softening of the steadfast gun-right stance he showed throughout the campaign.

Trump may have changed his views after investigators found that the Orlando shooter legally bought his guns after he had been investigated for terror connections and reportedly placed on a watch list.

This may put Trump on a collision course with the powerful National Rifle Association, which has said that restrictions "like bans on gun purchases by people on 'watch lists' are ineffective, unconstitutional or both."

A Trump tweet on Wednesday read: "I will be meeting with the NRA, who has endorsed me, about not allowing people on the terrorist watch list, or the no fly list, to buy guns."

The group answered that they would be "happy to meet" with the Republican flagbearer.

"The NRA believes that terrorists should not be allowed to purchase or possess firearms, period," NRA spokesman Chris Cox said in a statement.

"Anyone on a terror watch list who tries to buy a gun should be thoroughly investigated by the FBI and the sale delayed while the investigation is ongoing."

"Surely we can agree, if the FBI is watching you for suspected terrorist links, you should not be able to buy a gun with no questions asked," she said.