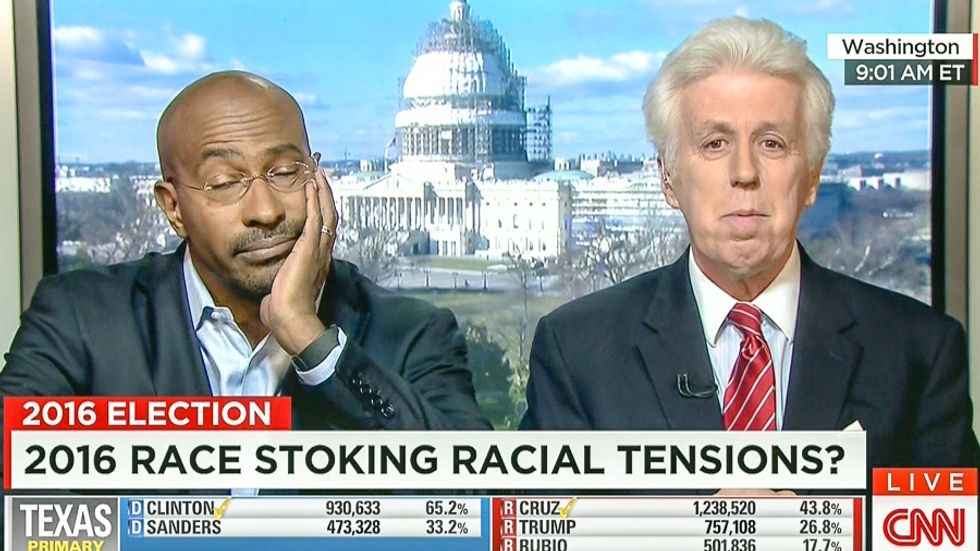 While Donald Trump is trying to walk back his racist attacks on a federal judge by insisting that he never attacked Judge Gonzalo Curiel’s ethnicity or heritage when, in fact, he did several times (a familiar pattern with Trump), his GOP defenders are straining credulity to defend him.

Trump has said that judges of Mexican descent or of the Muslim faith cannot be impartial in a case involving his Trump University scam because of his proposals for building a wall with Mexico and banning Muslims from entering the country, respectively, but according to his supporters, Trump never made such a claims and the real problem is with Judge Curiel.

Here are seven of the most ridiculous defenses of Trump’s comments:

In what can only be described as a bizarre meltdown, CNN’s resident Trump apologist, Jeffrey Lord, said yesterday that not only is Trump not a racist, but everybody else is racist:

Rep. Duncan Hunter, R-Calif., said today on Sean Hannity’s radio program that Judge Curiel’s membership in a state Hispanic bar association is just like belonging to a white supremacist group, alleging that the group wants to take California “back” from the U.S. “and they’re gonna take it by force if they have to.”

Hunter added that a “Muslim-American judge of Iraqi descent” would not be able to preside over a case involving the late Chris Kyle because he “killed a whole bunch of bad guys in Iraq.”

Hannity, for his part, likened Curiel presiding over a case involving Trump University to a Hispanic or black defendant facing an all-white jury.

After insisting that Trump’s claim that Judge Curiel shouldn’t be allowed to hear his case because of his Mexican heritage wasn’t racist, former Gov. Mike Huckabee told Megyn Kelly last night that he believes Judge Curiel is motivated not necessarily by an ethnic bias but by a left-wing political agenda that makes him prejudiced against Trump in the fraud case.

When Kelly asked Huckabee if he has any evidence demonstrating such an anti-Trump political bias, Huckabee conceded that he had none:

While Rep. Lee Zeldin, R-N.Y., didn’t agree with Trump’s “regrettable” statement, he went on to claim in a rather awkward CNN interview yesterday that he could just as “easily argue that the President of the United States is a racist with his policies and his rhetoric.”

Zeldin said that he would rather talk about what he sees as the racist “micro-targeting to blacks and Hispanics” from the Democratic Party, which is “more offensive to me, what I’ve seen through the years, than this one statement.”

Senate Judiciary Chairman Chuck Grassley invoked remarks made in years past by Supreme Court Justice Sonia Sotomayor in order to defend Trump’s allegation that Judge Curiel cannot be impartial because he’s “a Mexican.”

“I think that you don’t have any more trouble with what Trump said than when Sotomayor said that -- when she was found saying in speeches that, quote, ‘A wise Latina woman with the richness of her experience would more often than not reach a better conclusion than a white male,’” the Iowa senator told the Des Moines Register.

While Trump was insisting that Mexican-Americans are inherently disqualified from presiding over a case involving him, Sotomayor was making the exact opposite point, as she was describing the need for a more diverse judiciary that isn’t shaped entirely by the background and experiences of white men.

“I do believe every person has an equal opportunity to be a good and wise judge, regardless of their background or life experience,” she said.

When asked about Trump’s remarks on the judge’s ethnicity, Sen. Orrin Hatch, R-Utah, said that it is unfair for the media to cover Trump like any other candidate for office because it is his first time running for an elected position:

Sen. Orrin Hatch (R-Utah) seems to think Trump is being unnecessarily bullied for his remarks. “Be nice to him. He’s a first-time candidate,” he told reporters. “When you’re in a big race, you make mistakes.”

In a separate interview with The Huffington Post, Hatch speculated that Trump just felt like he was “being picked on.”

“He’s the type of a person who will make comments that sometimes you differ with, and then as he gets to reality on things,” the senator said. “He’ll change his point of view and be, you know, more responsible.”

“I think he does feel like he’s being picked on by the courts. A lot of people who go through the courts feel the same way. He just speaks about it.”

Hatch’s claim that the media should have a lower standard for Trump is as laughable as it is revealing that the GOP believes Trump should get a pass for his racist remarks.

Last week, Trump spokeswoman Katrina Pierson said that Judge Curiel is biased because he’s a member of the California La Raza Lawyers Association, which she said “is an organization that has been out there organizing these anti-Trump protesters with the Mexican flags… so Mr. Trump is just stating the obvious.”

She added that the group sponsors “criminal rallies” and “criminal protesters” under “the guise of an anti-Trump protest” and “this judge is connected to that.”

“This is not a pro-American group who is out there wanting to get their voices heard, they are out there pushing to destroy, propose anarchy and to stop an American president from running for office,” she said.

Pierson, like many other right-wing commentators, apparently confused the La Raza Lawyers Association with the National Council of La Raza, a Latino group that is a favorite bogeyman of the Right. Aside from the fact that NCLR is not the anarchy-promoting criminal organization that Pierson claims it is, it isn’t even the organization that Curiel is a member of. The two are completely different groups; the lawyers’ organization is nonpartisan and “focuses on the professional development of Latino lawyers and encouraging students to pursue a career in law.”