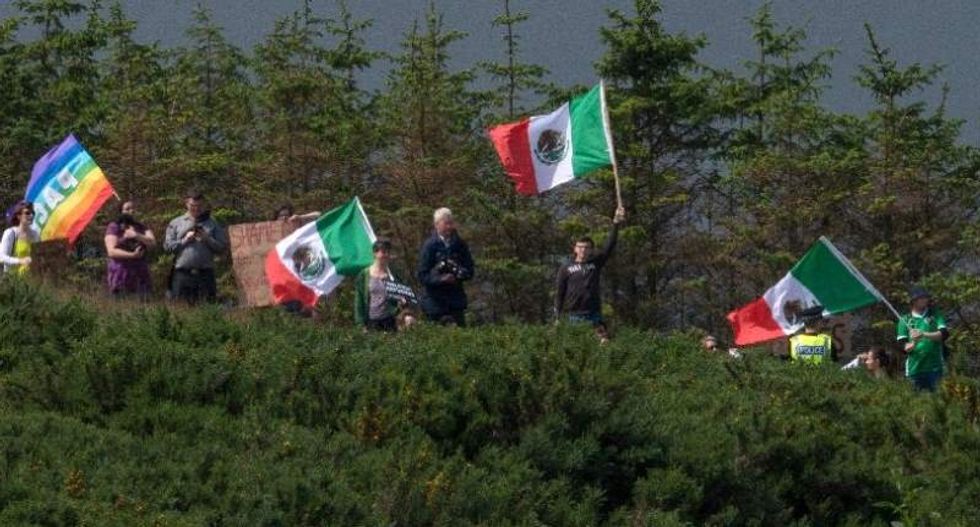 A group of protesters wave Mexican flags on the hillside above the Trump International Golf Links minutes before Donald Trump's arrival at the course, north of Aberdeen on the East coast of Scotland, on June 25, 2016. (Agence France-Presse/Michal Wachucik)

Neighbours whose properties border the estate have raised the flag in a symbol of opposition and solidarity due to Trump's disparaging remarks about Mexican people and promise to build a wall on Mexico's border with the US.

A Mexican flag waved in the breeze close by as Trump touched down on a golf course green in a helicopter emblazoned with his name.

"I want the American journalists in particular to see it," said David Milne, whose house looks down on the clubhouse and the 18th green, speaking to AFP by phone.

He said the flag was a "little nod of solidarity to the Mexican people" and symbol of opposition to Trump.

"If he gets to be president the US will be at war in a week and bankrupt in two. The man is an idiot," Milne added.

Trump's development was hugely controversial in Scotland as it was built on an environmentally protected coastline of rolling dunes, and he stoked anger by trying to stop a wind farm he said would spoil the resort's view.

Asked about the protesters, Trump compared them to rival candidates for the Republican nomination who he had defeated, such as Senator Ted Cruz.

"I have one or two that are contentious and that's fine because they lost, it's like some of the people I beat in the primaries," to win the Republican nomination for president, Trump told reporters.

Asked if he suffered from a lack of support among European leaders, some of whom have criticised his pledge to ban Muslims from entering the United States, Trump was dismissive.

"I don't care. It's irrelevant. I'll tell you who has endorsed me, the people of the United States are endorsing me, that's what relevant to me," Trump replied.

The visit to the resort in the village of Balmedie, north of the oil city of Aberdeen, came at the end of a two-day trip to Scotland, Trump's first international visit since he became the presumptive Republican nominee.

The trip, which coincides with a shock vote by Britain to leave the European Union, stands in stark contrast to the welcome President Barack Obama received on a visit to Germany in 2008, when he was the presumptive Democratic nominee.

At the time, Obama addressed a crowd of tens of thousands about his hopes of closer links to a unified Europe.

Trump has criticised the continent's leaders as "weak", and accused them of allowing uncontrolled immigration and failing to combat terrorism.