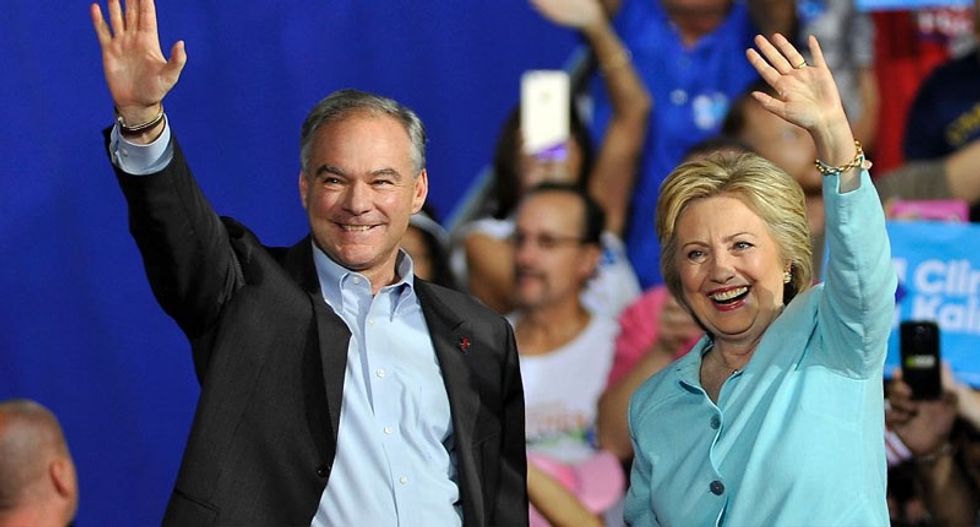 Tim Kaine made a big splash in his first appearance as Hillary Clinton's running mate for the White House, savaging Donald Trump's foreign policy ideas as dangerous and wowing a Miami crowd with fluent Spanish.

Kaine, a 58-year-old senator from the battleground state of Virginia, won many a cheer and laugh and frequent applause as he addressed a campaign rally late Saturday, one day after being tapped for the Democratic ticket.

Clinton beamed as she sat behind Kaine during his rousing speech, after introducing the political veteran as the antithesis of the Republican ticket of Trump and Mike Pence.

If Trump is often criticized as an egotistical blowhard, Kaine came across as an agile, knowledgeable and self-deprecating speaker.

Kaine slammed recent comments by Trump to the effect that if Russia were to attack a Baltic nation, he as president would come to their aid only after assessing whether they "have fulfilled their obligations to us."

"Folks, that's an open invitation to Vladimir Putin to roll on in," said Kaine, an experienced foreign policy hand who serves on both the Senate Foreign Relations and Armed Services committees -- and whose son is about to deploy with the US military to Europe.

He dazzled the crowd right off the bat by greeting them in very good Spanish -- "bienvenidos a todos," or welcome to all -- saying that his values were "fe, familia y trabajo." That means faith, family and work.

Both he and Clinton drove home what is emerging as a key campaign message: that Trump is a deeply divisive figure with despotic tendencies -- and that Clinton is his polar opposite.

"When someone says I alone can fix it, that should set off alarm bells," Clinton said. "That is not a democracy."

"Do you want a trash talking president or bridge building president?" Kaine asked at one point. "Hillary knows that we're stronger together."

The former mayor and governor praised Clinton as sharing his values and said, again in Spanish, "we will be soul mates in the big battle to come."

But even as the party basked in this seeming love fest, a whiff of scandal likely to rattle party unity emerged.

A cache of leaked emails from Democratic party leaders' accounts includes at least two messages suggesting an insider effort to hobble Bernie Sanders' upstart campaign -- including by seeking to present him as an atheist to undermine him in highly-religious states.

Trump pounced on the leaks.

"Someone does have to be held accountable," said Weaver.

The Democratic Party seemed to have "its fingers on the scale" for Clinton, Weaver added during the interview on the television network's website.

"We have an electoral process. The DNC, by its charter, is required to be neutral among the candidates. Clearly it was not."

Sanders waged a feisty yearlong battle against Clinton in the Democratic primaries. She clinched enough delegates to secure the nomination in early June, but Sanders did not concede defeat and endorse her until July 12.

The former first lady tapped Kaine late Friday in what was widely seen as a safe but wise choice: the popular senator can help her lock in the swing state of Virginia and ticks a lot of boxes beyond that.

In addition to his fluency on national security issues -- shaping up as key in the 2016 race -- his strong Spanish is seen as a major asset in cementing Clinton's heavy lead with Hispanic voters.

With working-class roots and a spotless track record, Kaine is also seen as helping her garner support among independent male voters.

Kaine also has strong ties to the African-American community, dating back to his work as a civil rights lawyer.

"He is the one!" gushed Helen Bhagwandin, a 60-year-old, retired professor, as she left the Miami rally. "He is just the most experienced and best prepared person to do this job. What more do we need?"

Clinton, 68, had said she wanted a running mate with enough experience to "literally get up one day and be the president of the United States."

Not everyone is happy about Clinton's choice of a center-left running mate, which runs the risk of alienating Sanders supporters on the party's far left.

But major labor and pro-Democratic groups praised the Kaine pick, including Planned Parenthood, AFL-CIO and other big unions, and the Sierra Club.

Kaine and Clinton officially joined forces ahead of the Democratic National Convention which kicks off Monday in Philadelphia, where they will be elevated as the official nominees to the party's presidential ticket.

Nationwide polls suggest Clinton is running almost neck and neck with Trump, who painted a dark picture of an America mired in poverty and violence as he accepted his party's nomination Thursday, promising to restore law and order, clamp down on immigration and put America first.