WATCH: Alex Jones flummoxed and enraged after comedian steals the stage at his GOP convention rally 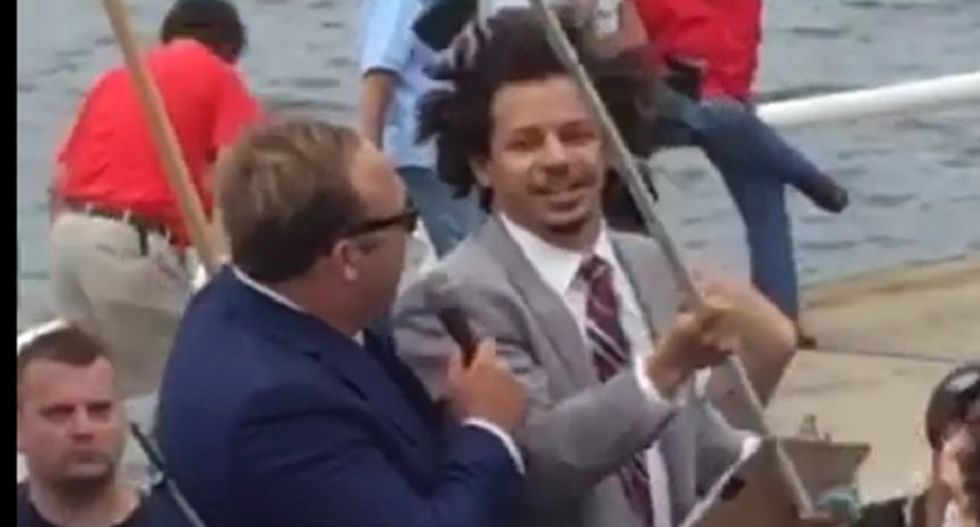 Comedian Eric Andre managed to publicly troll the nation's foremost conspiracy theorist, Alex Jones, during a rally on Monday in Cleveland as the Republican Convention was revving up.

Andre was in the crowd and began having minor skirmishes with audience members, when Jones brought him up onstage, mistaking the African-American comedian for Trevor Noah, the South African host of the Daily Show.

When onstage, Andre informs Jones that the audience was pushing him and he "just wanted to sign up for the open mic."

Jones sarcastically responded, "Ah no, the Democrats are never violent, like the Black Lives Matter events and attacking the Trump people."

Andre responded, "I'm not a Democrat either, I'm a nihilist."

Jones then says, "It seems like you're upset" to which Andre, without missing a beat, replies, "I want you to have sex with my wife." He then tries to give Jones his hotel key. He then asks Jones "why does my pee pee come out yellow?"

Jones still seems unsure of Andre's motives, when Andre throws a wrench into it by asking Jones who "put the bomb in Building 7," referring to the conspiracy theory that the U.S. government, not terrorists, is responsible for the Sept. 11, 2001 attack.

Andre gets kicked off stage when he starts singing a song he made up called "Don't tread on me," poking fun at the anti-government saying associated with tea party types.

Watch the full video, as posted to Facebook by CNN, here. The section with Andre starts at about the 5:45-minute mark.