The Alt-Right Dictionary: 7 terms you need to know to understand Trump's most hateful supporters 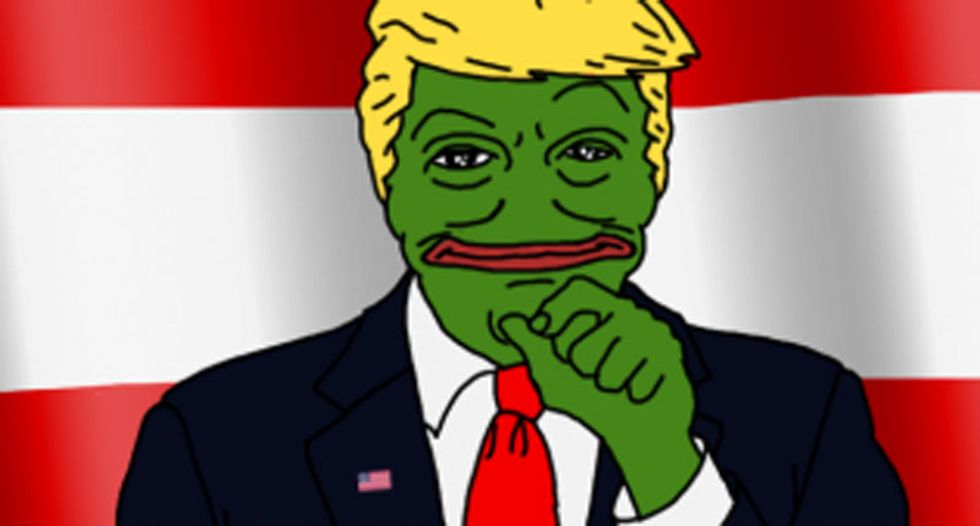 Since Republican presidential nominee Donald J. Trump went public with his embrace of the so-called "alternative right”—which happened when he hired alt-right promoter Stephen K. Bannon as his campaign chief—the self-styled renegade offshoot of cultural conservatism is getting a whole lot of attention.

What’s so renegade about the alt-right? It puts on bold display the racism and misogyny that has always fueled the so-called conservative movement, but which has typically been rationalized through themes involving the word “freedom,” employed to justify a right to discriminate, whether against members of races or creeds other than your own, or by gender, sexual orientation or gender identity. The alt-right hordes on Twitter and other internet haunts dispense with the obfuscation, declaring the superiority of white people and demonstrating contempt for blacks and Jews, hating on women, and preposterously whining that they are the targets of a “white genocide.”

The alt-right encompasses a range of right-wing hate groups and ideologies, from the Neo-Nazi Daily Stormer crowd to the more buttoned-down wanna-be-wonks at the National Policy Institute. As Democratic presidential nominee Hillary Clinton prepared to deliver a speech Thursday devoted to Trump’s exploitation of the alt-right, the movement’s denizens erupted in a stream of vitriol and fevered attempts to define their own movement before Clinton’s definition took hold.

Like all political movements, the alt-right has its own lexicon and memes, as well as its own interpretation of news events. Below you'll find a brief list of terms you may use as a guide if you care to visit the swamps in which adherents to this 21st-century version of white supremacist ideology reside.

1. Alt-right. As Julie Andrews once sang before her character fled the Nazis: “Let’s start at the very beginning.” The term “alt-right” is shorthand for "alternative right." Just as, say, alt folk musicians envisioned themselves as a more modern, hipper iteration of the Dylan-era folk music that preceded them (which really wasn’t folk music at all, but I digress), alt-righties perceive their movement to be the tweaked-for-millennial-consumption adaptation of the ideologies professed by such uncool paleoconservatives as Cranky Uncle Pat Buchanan and Klanboy David Duke.

One form of hatred that appears to unite alt-righties? Misogyny. Man, do they hate feminists! Yiannopoulos even did a lecture tour titled, “Feminism is cancer.”

Gearing up a Twitter offensive in advance of Hillary Clinton’s speech in Reno about the alt-right, #altright members on Twitter set out to define their own movement.

“#AltRight means you don't think a room full of white males is a problem to be fixed,” wrote @hateful_heritic.

“#AltRightMeans it's time to oppose HUD/Section8 housing moving blacks into the suburbs. Save our White neighborhoods”, added@_AltRight_, with an accompanying photo of a lone white man in a swimming pool, surrounded by dark-skinned people.

Some posted Richard B. Spencer’s white-identity video, “Who are we?” (Money quote: “I’m a Roman, a Briton, a Dane…”)

For giggles, there’s also this parody of Billy Joel’s “We Didn’t Start the Fire,” by American Renaissance, another alt-right racist group.

Cuck can be a noun or a verb, replete with schoolboy giggles over its rhyming with f**k. Alt-righties often describe themselves as “uncucked,” which seems a perverse permutation of former presidential candidate Shirley Chisholm’s description of herself as “unbought and unbossed.” (Chisholm was the first black candidate to run for the presidential nomination of one of the two major political parties, and one of the first women to do so.*) In defense of the term, Milo Yiannopoulos (who is British) wrote a post on Breitbart News titled, "'Cuckservative’ Is a Gloriously Effective Insult That Should Not Be Slurred, Demonised, or Ridiculed.”

3. Glorious. To alt-righties, this appears to be the superlative of adjectives, applied to many things other than the term cuckservative, harkening back to the rhetoric of the Third Reich. (In the book Catastrophe and Meaning: The Holocaust and the Twentieth Century, authors Moishe Postone and Eric L. Santner trace the evolution of the term “glory” from the World War I appellation “fields of glory” to its use by Nazis in describing the mass murder of Jews in World War II.)

The Daily Stormer website routinely refers to Trump as “Our Glorious Leader,” as in the post, "Our Glorious Leader Calls for a Ban on All Moslems," and “Glorious Leader Donald Trump Refuses to Denounce Daily Stormer Troll Army,” a reference to the antisemitic trolling of GQ writer Julia Ioffe after she wrote an article on Trump’s wife, Melania. In an interview with CNN’s Wolf Blitzer, Trump declined to renounce the trolling, which included death threats.

Twitter user @_AltRight_ insists that Trump’s #DeportationForce will be “glorious.” In fact, there’s a whole lotta "glorious” ugliness in her Twitter feed.

4. Pepe. Pepe the Frog was once the generic mascot of the anonymous message-board site 4chan, one of the internet hollows where the alt-right first congregated. The alt-right glommed on to it, creating all manner of memes depicting it, even in the uniform of an SS officer and most famously as the face of Donald Trump. Vice’s Roisin Kiebard explains it all.

If you’ve seen this meme, you’ve met the alt-right.

As alt-righties geared up for Clinton’s speech about Trump's alliance with the alt-right, a gif appeared in the #altright feed featuring the image of a white hand feeding Pepe-shaped bullets into the magazine clip of an assault rifle.

5. Rare Pepe. According to the Daily Beast’s indispensable Olivia Nuzzi, the term “rare Pepe” means "an ironic categorization for certain versions of the meme: Pepe, his eyes red and irises swastika-shaped, against a trippy rainbow backdrop." The irony apparently stems from 4chan’s attempts to purge Pepe once the frog became an alt-right racist.

7. White genocide. A common theme in alt-right tweets and rants, in which the admission of non-white immigrants to the U.S. or Europe is characterized as the destruction of the white race. Other forms of so-called “white genocide” include racial mixing and the adoption of non-white babies by white people. Such adoptive parents are deemed to be "race traitors."