Trump claims he regrets remarks that 'may have caused personal pain' 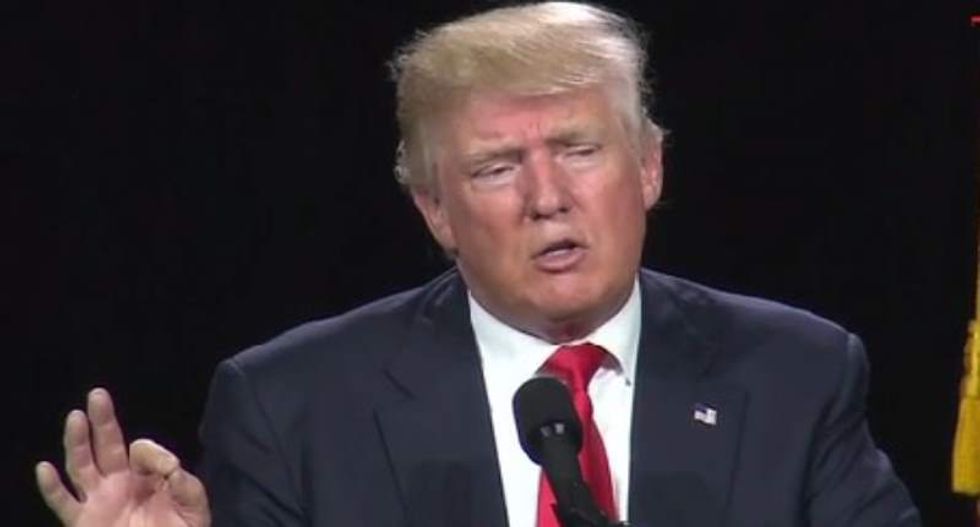 Republican presidential nominee Donald Trump apologized on Thursday for past remarks that "may have caused personal pain" as he sought to refocus his message in the face of falling opinion poll numbers in his first speech since shaking up his campaign team this week.

"Sometimes, in the heat of debate and speaking on a multitude of issues, you don’t choose the right words or you say the wrong thing," Trump told a crowd in Charlotte, North Carolina. "I have done that, and I regret it, particularly where it may have caused personal pain. Too much is at stake for us to be consumed with these issues."

Trump did not cite any examples of such remarks. The New York businessman has made his "tough talk" and brash style a selling point of his campaign for the Nov. 8 election, rarely apologizing in the face of criticism even from within his own party for own party for comments insulting women, Muslims and Mexican immigrants.

In his presidential announcement speech last year, he described some Mexican immigrants as "criminals and rapists." He recently faced a barrage of criticism for belittling the family of a Muslim American soldier who died in Iraq in 2004, after the soldier's father spoke out against Trump at the Democratic National Convention last month.

"We learned tonight that his speechwriter and teleprompter knows he has much for which he should apologize," the campaign said in a statement. "But that apology tonight is simply a well-written phrase until he tells us which of his many offensive, bullying and divisive comments he regrets — and changes his tune altogether.”

Trailing Clinton in national opinion polls, Trump has tried to reset his campaign, announcing on Wednesday a shake-up of his senior campaign staff for the second time in less than two months. In the past week, he has abandoned his free-wheeling style of campaigning, instead using a teleprompter at every rally.

Trump also began adding non-rally events to his campaign schedule, visiting a police lodge on Thursday afternoon and hosting a roundtable on Wednesday morning. Previously, Trump had eschewed such events that historically comprise a significant portion of a candidate's time.

Trump's speech on Thursday night, echoing remarks earlier in the week in Wisconsin, reached out to minority voters and accused Clinton of being dishonest.

"So while sometimes I can be too honest, Hillary Clinton is the exact opposite: She never tells the truth," Trump said. "In this journey, I will never lie to you. I will never tell you something I do not believe."

Trump's new campaign manager, Kellyanne Conway, promised on Thursday he would stick to a more disciplined and uplifting message to voters in the final dash to Election Day without crimping his freewheeling style.

Conway said the candidate's White House bid could preserve his "authenticity" and still move past a long string of controversies to focus on issues.

"We would like to take an uplifting, optimistic, policy-centric message directly to the American people," Conway told CBS's "This Morning," adding she was confident the former reality television star could stick to a sharper message.

Wednesday's campaign reshuffle also brought on Steve Bannon, a combative conservative who headed the Breitbart News website, as chief executive officer, in a move seen as giving Trump a chance to emphasize his unconventional style.

Conway said the more disciplined approach by Trump, who has never held elective office, would not mean jettisoning his more off-the-cuff and unpredictable style.

"We're going to make sure Donald Trump is comfortable about being in his own skin - that he doesn't lose that authenticity that you simply can't buy and a pollster can't give you," she said on CNN. "Let him be him, in this sense."

Trump has so far been unable to extend his appeal beyond white middle-class voters who pack his rallies. Conway said her rise to campaign manager showed Trump valued a more policy-driven approach that would appeal to women and independent voters.

"The way to speak to women and all Americans is through issues. We've got to get away from this content-free campaign and on to the substance," she said.

The campaign will put two ads on the air in five states this week, the first campaign ads Trump has aired in the general election, Conway said. He will also continue a series of policy-focused speeches after giving speeches in the past two weeks on jobs, national security and law and order.

"He's going to give these policy speeches," she said on CNN. "You'll see more of those. Next week is immigration week, followed by education week."