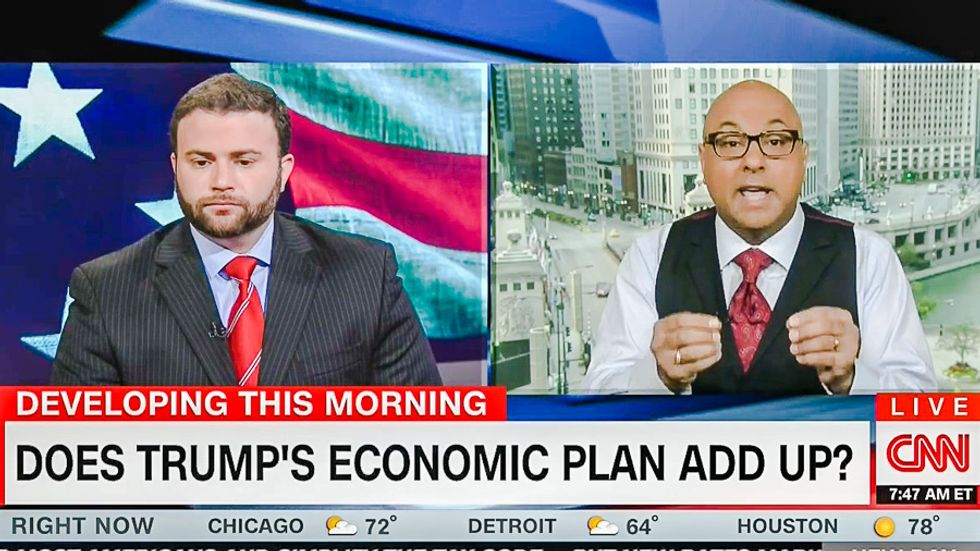 After Trump revealed his tax plan, which is expected to largely benefit the wealthiest Americans, economic analyst Ali Velshi told CNN that the numbers did not add up.

"The top income tax level in America is 39.6 percent," Velshi explained on Tuesday. "To allow taxes to go down to a maximum of 25 percent and allow for Donald Trump's [spending] increases is preposterous. If he doesn't get anything else -- he gets his expenditure increases and his tax decreases -- we'll have a budgetary hole of about $9 trillion extra."

"And Donald Trump says we'll take care of that with economic growth because people will pay less taxes, they'll feel great about the economy, companies will employ people," Velshi continued. "That is classic sort of trickle-down economics which actually hasn't worked over the last 10 or 15 years."

Borelli, however, argued that any shortfall created by Trump's tax plan could be remedied with "some new taxes on imports and elimination of deductions."

"And I think trickle-down economics has actually worked," he insisted. "We have a vice presidential candidate, Mike Pence, who actually used the lower corporate tax rate, lower income tax rate and saw 150,000 new jobs in Indiana during the time he was governor."

Velshi countered that state economic models could not be applied to countries.

"A state is very different from a country," Velshi pointed out. "Indiana can bring down taxes and attract businesses from and residents from neighboring states. A country, it's much harder to do that."

"Nobody controls their economy better than China," the economic analyst said. "And all China's economy has done for the last 10 years is slip. Economic growth has slipped. So the fact is there are global economic head winds that have substantially more to do with your GDP growth than your policies do."

Velshi added: "Presidents get too much blame and too much credit for the economies. So the fact that Donald Trump in his speech very specifically said 'I can do this and it's going to be easy' shows that he lacks the sophistication to understand the one basic about economics in America: It's not easy."

"The researchers calculated that when the richest 20% of society increase their income by one percentage point, the annual rate of growth shrinks by nearly 0.1% within five years," CNN Money reported. "This shows that 'the benefits do not trickle down,' the researchers wrote in their report, which analyzed over 150 countries."