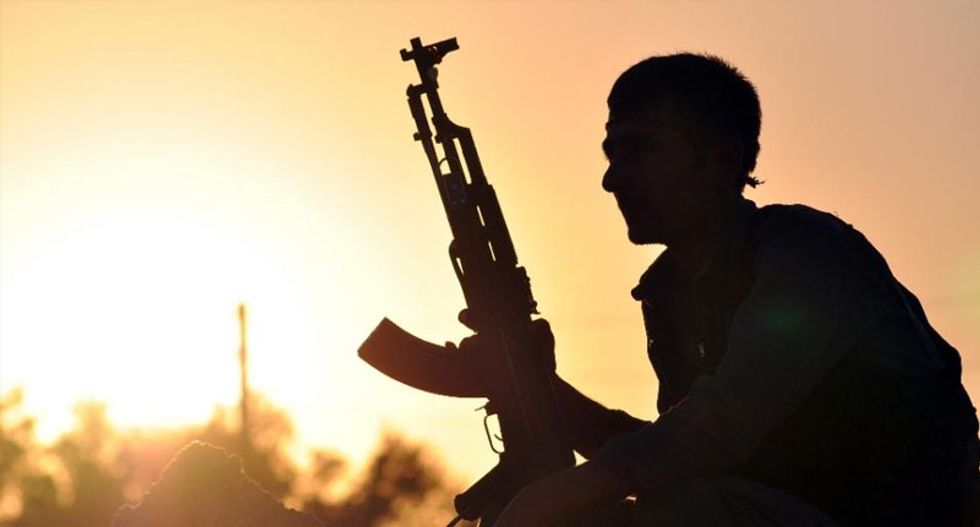 A Kurdish fighter guards a checkpoint near the Syrian town of Ain Issi, on July 10, 2015 (AFP Photo/Delil Souleiman)

Turkey warned Monday it would carry out more strikes on a US-backed Kurdish militia in Syria if it fails to retreat, as Washington said President Barack Obama will meet his Turkish counterpart over the weekend.

Turkish forces pressed on with a two-pronged operation inside Syria against Islamic State (IS) jihadists and the Syrian Kurdish People's Protection Units (YPG), shelling over a dozen targets.

The strikes against the YPG are hugely sensitive as the outfit -- seen as a terror group by Ankara -- is allied with Turkey's NATO partner the United States in the fight against IS in Syria.

Ankara has said it killed 25 Kurdish "terrorists" in strikes on YPG positions on Sunday -- meaning the two US-backed partner forces are now fighting each other.

Pentagon spokesman Peter Cook said the clashes were "unacceptable and a source of deep concern."

He called for steps to de-escalate the situation and said Washington had once again told the YPG to retreat east of the Euphrates. This has "largely occurred," he added.

US Defence Secretary Ashton Carter later said he had appealed to both sides not to fight.

"That's the basis of our cooperation with both of them -- specifically not to engage one another," Carter said.

Two US defense officials told AFP that SDF forces had "all" withdrawn east of the Euphrates, but they said some Kurdish people remained to the west.

Turkey's operation aims to push the YPG back across the Euphrates to prevent it joining up a region east of the river already under its control with a Kurdish-held area to the west.

Ankara fears the emergence of an autonomous Kurdish region in Syria would bolster Kurdish rebels across the border in southeastern Turkey.

The situation in northern Syria is yet another complication in the country's already tangled civil war, and potentially throws a wrench in US plans to defeat the Islamic State group in the region.

US Vice President Joe Biden said last week that Washington had ordered the YPG to retreat or risk losing American support. But Ankara says it had seen no evidence of this.

President Obama will meet his Turkish counterpart Recep Tayyip Erdogan on Sunday in China on the sidelines of the Group of 20 summit, with Syria high on the agenda, top aide Ben Rhodes announced Monday, stressing the need "to stay united."

It will be the first meeting between the two leaders since a failed coup attempt in Turkey on July 15.

Turkish Foreign Minister Mevlut Cavusoglu accused the Kurdish militia of "ethnic cleansing" in the mainly Arab area around the city of Manbij, west of the Euphrates, which the YPG wrested from IS earlier this month.

Turkey considers the YPG an offshoot of the Kurdistan Workers Party (PKK), which has waged a deadly insurgency on Turkish territory for over three decades.

The Britain-based Syrian Observatory for Human Rights said at least 40 civilians were killed in Turkish shelling and air strikes on pro-Kurdish positions in northern Syria on Sunday.

A 400-square-kilometre (154-square-mile) area has been cleared since the operation began on August 24, it added.

President Erdogan said in a statement the offensive would continue until "the threat of Daesh and YPG/PKK is over." Daesh is an acronym for IS.

On Monday, at least five people were injured in the Turkish town of Kilis by rockets fired across the border from an IS-held area, NTV television reported. The army returned fire, the report said.

Ankara-backed forces faced little resistance when they captured the IS border stronghold of Jarabulus last week, days after a suspected IS suicide bombing killed 55 people in southeast Turkey.

But the standoff with the Kurdish militia has been intense, with a Turkish soldier killed on Saturday in a YPG rocket attack on his tank.

The Turkish army said it had fired 61 times on targets in northern Syria in the previous 24 hours. It did not say which group was targeted.

Deputy Prime Minister Numan Kurtulmus said all relevant parties had been forewarned of Turkey's operation in Syria, including the regime of President Bashar al-Assad, a bitter enemy of Ankara who had been informed by its ally Russia.

Syria's official Sana agency said Damascus had written to the UN Security Council to protest Turkey's "crimes against humanity" in the country.