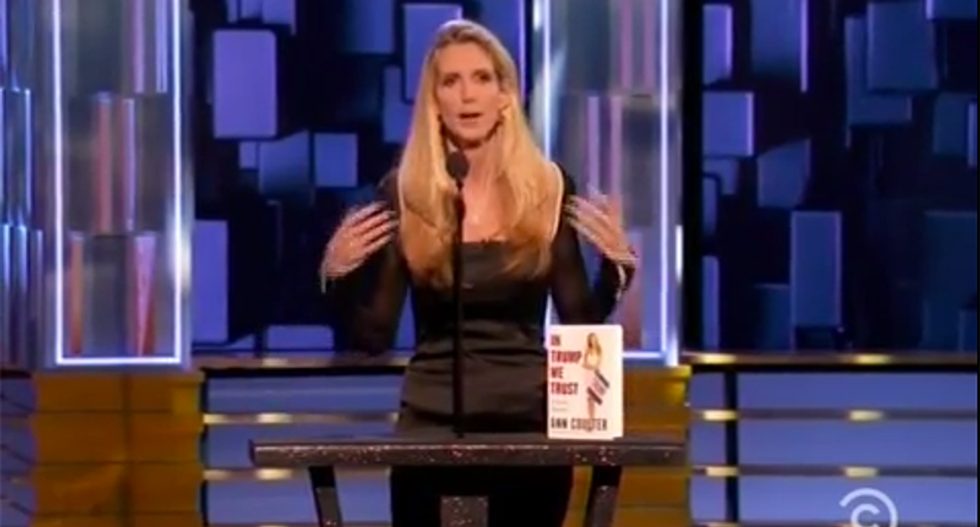 The exciting event of Ann Coulter being eviscerated during Rob Lowe's Comedy Central Roast finally aired Monday night. But audiences saw that not only was it Coulter that got roasted, she humiliated herself onstage too.

“I want to welcome everybody to the Ann Coulter Roast with Rob Lowe,” she said at the opening of her speech. Unfortunately, for her, that remained the only funny part of her speech.

She shamelessly whipped out her latest book about Donald Trump and the audience booed. She tried to crack a joke at David Spade's expense, making a pun out of his name, and the audience groaned.  While Lowe is known to support Republicans, even her anti-Hillary Clinton jokes didn't land. As if he pitied her, Lowe gave her a standing ovation. He was alone, however. At one point she tried to attack SNL's Pete Davidson, but even that ended badly as his heckling of her was better and drew more laughs from the crowd.

Ann Coulter blames Comedy Central for making her look unfunny: ‘You can do a lot in film editing’

There was a conglomeration of Coulter attacks, but the best came from singer Jewel, who slammed Coulter with this one: “I do want to say as a feminist that I can’t support everything that’s been said tonight. But as someone who hates Ann Coulter, I’m delighted.”

Check out the full video of Coulter's pitiful bomb and Jewel's clip below via the Daily Beast: