'He is a flat-out racist': Ana Navarro rains down hell on eye-rolling, mansplaining Trump surrogate 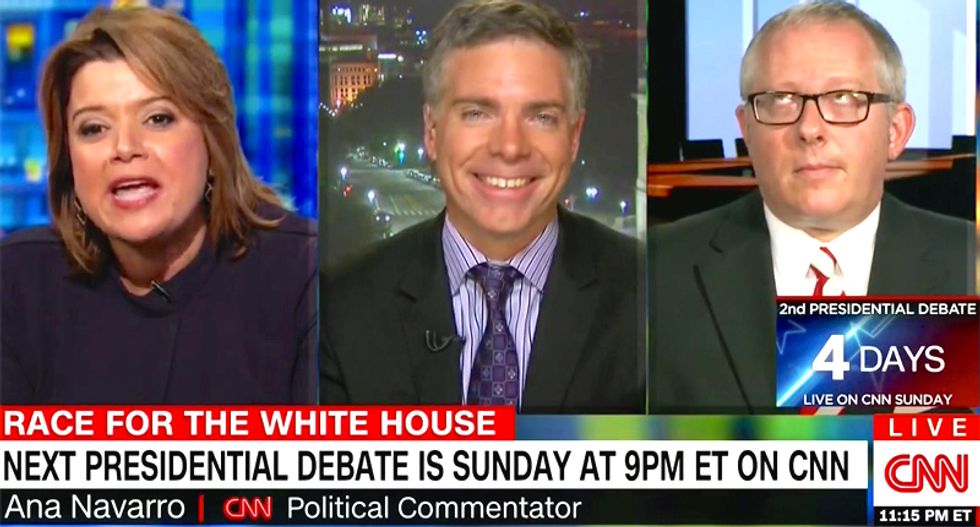 A former Trump campaign adviser tried to tell Republican Ana Navarro how upset he felt about her calling Donald Trump a racist -- and she proceeded to rain down hell on him.

During a panel on CNN Tonight with Don Lemon, former Trump campaign adviser Michael Caputo said it was "outrageous" that Navarro would accuse Donald Trump of attacking Mexicans from the very first day of his campaign.

Navarro then pointed out that Trump not only accused the Mexican government of intentionally sending "rapists" into the United States, but he also said that Judge Gonzalo Curiel was unqualified to oversee the case against Trump University because of his "Mexican" heritage.

Caputo didn't back down, however.

"Ana, for you to sit here and call Donald Trump a flat-out racist is outrageous," he said.

"Well let me do it again, and let me do it in two languages," she shot back. "Es un racista -- he is a flat-out racist, and it's what he's played on for 16 months. He is a bigot, he is a racist, he is a misogynist. He has said horrible things about women. He has said horrible things about immigrants, about Hispanics. He has yet to say one good thing about immigrants, and for your to shake your head and tell me that I'm the outrageous one, that's what outrages me."

As she talked, Caputo could only roll his eyes at her -- he couldn't come up with a decent defense.