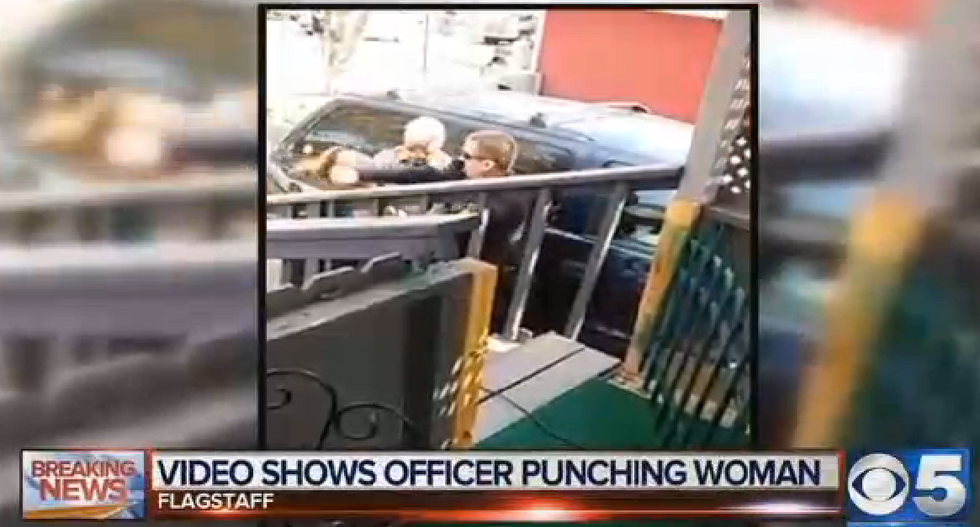 Arizona police are investigating an officer after video surfaced showing him punch a woman in the face.

Flagstaff police placed Officer Jeff Bonar on leave pending an investigation into an incident last Wednesday. Cell phone video captured by an onlooker and posted to Facebook shows cops attempting to arrest a woman, who police say was “somewhat uncooperative.”

According to witness Jimmy Sedillo, authorities were at his home serving and eviction notice as he and his girlfriend, Marissa Morris, were moving their belongings to a new place. One of the officers approached Morris and tried to arrest her on a warrant. Morris protested and refused to go with the cops until they explained the nature of the warrant and showed her proof.

“He literally tackled her in front of my mom’s house,” Sedillo told KPHO-TV.

“She weighs maybe 110 pounds, maybe the officer was maybe 220,” Sedillo added. “He went [about] the whole thing all wrong.”

Morris was arrested on charges of assaulting an officer and resisting arrest. According to KPHO, she is still in police custody.

Flagstaff police said they are aware of the incident and launching a probe into the incident.

“Our agency is very concerned by what is depicted in the video,” a spokesperson said. “We are immediately initiating an internal investigation into this incident.”