There are four ways Donald Trump may be guilty of treason, says law expert 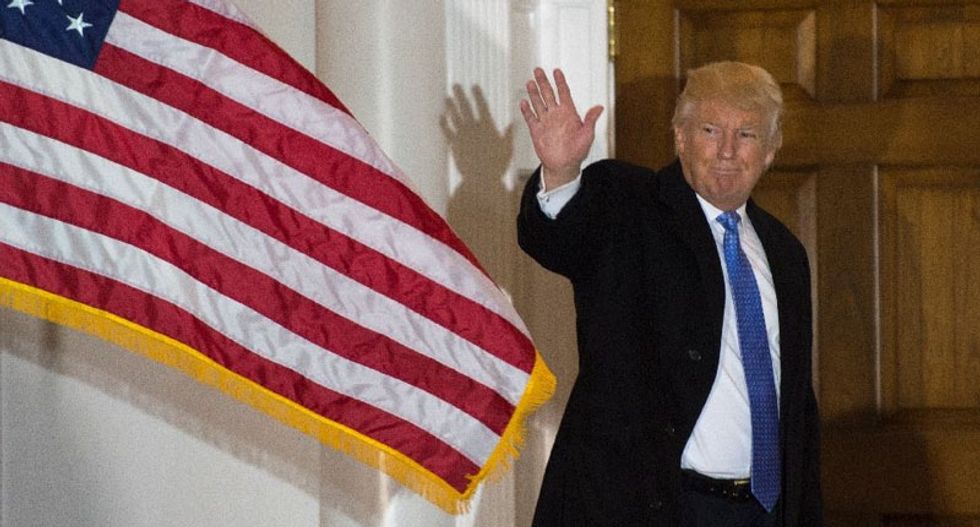 Former Assistant Secretary of State and international human rights expert John Shattuck said this week that President-elect Donald Trump must welcome a thorough investigation of Russian interference in the 2016 election because the questions it raises leave him vulnerable to charges of treason.

"A specter of treason hovers over Donald Trump," Shattuck wrote in the Boston Globe. "He has brought it on himself by dismissing a bipartisan call for an investigation of Russia’s hacking of the Democratic National Committee as a 'ridiculous' political attack on the legitimacy of his election as president."

With evidence piling up that forces within Russia worked to tip the election in Trump's favor, Shattuck said that it's unwise for Trump to bat aside the accusations as if they're unimportant.

Shattuck -- who was appointed by Pres. Bill Clinton and currently serves as a professor of diplomacy at the Fletcher Center of Law and Diplomacy and as a senior fellow at the Harvard Kennedy School’s Carr Center for Human Rights Policy -- quoted the director of U.S. Cyber Command Admiral Mike Rogers.

"There are several possible explanations for Trump’s position" in avoiding an investigation, said Shattuck. "They are not mutually exclusive."

In each of these scenarios, the president-elect is engaging in behaviors that fall under the definition of treason, Shattuck wrote, which is committed by a person “owing allegiance to the United States who...adheres to their enemies, giving them aid or comfort." The crime of misprision of treason is committed by a person “having knowledge of the commission of any treason [who] conceals and does not disclose."

1. Trump may be attempting to shore up his political standing ahead of the meeting of the Electoral College on Monday.

2. He may be trying to undermine public confidence in U.S. intelligence agencies so that when he is inaugurated in January, he can "intimidate them and have a freer hand in reshaping the intelligence product to suit his objectives."

3. He may be testing to see whether the American public is willing to follow his lead over that of the intelligence community and "follow his version of the truth about national security threats."

4. He may be attempting to cover up evidence of "involvement or prior knowledge by members of his campaign team or himself in the Russian cyberattack."

Shattuck said, "By denigrating or seeking to prevent an investigation of the Russian cyberattack Trump is giving aid or comfort to an enemy of the United States, a crime that is enhanced if the fourth explanation applies -- that he is in fact seeking to cover up his staff’s or his own involvement in or prior knowledge of the attack."

While there has been no disclosure thus far of evidence that shows Trump was involved in or knew in advance about the Russian government's actions, Shattuck said that a thorough investigation is clearly warranted.

He then laid out a series of known quantities that contribute to the air of suspicion and doubt around Trump's claims that there was no collusion between his campaign and the Russian government.

"Paul Manafort, Trump’s former campaign manager, has had extensive political dealings with the Russian government. Trump’s designate for National Security Adviser, Lt. Gen. Michael Flynn, has appeared as a commentator for Russian state television and sat with Vladimir Putin at a Russian gala. As a candidate, Trump repeatedly praised Putin and took positions favorable to the Russian government. As reported by the New York Times, the president-elect’s son, Donald Trump Jr., told a real estate gathering in 2008 that 'Russians make up a pretty disproportionate cross-section of a lot of our assets,' adding, 'we see a lot of money pouring in from Russia.' Two days after the election, Russia’s deputy foreign minister, Sergei Ryabokov, was quoted by the Times as saying that 'there were contacts' between Moscow and the Trump campaign, and that members of the campaign staff 'were staying in touch with Russian representatives.'”

To continue to stall an investigation, Shattuck said, will leave Trump permanently vulnerable to questions about the legitimacy of his presidency. The president-elect, he said, must act quickly to "clear the air" lest "a specter of treason" hover over him and his presidency.