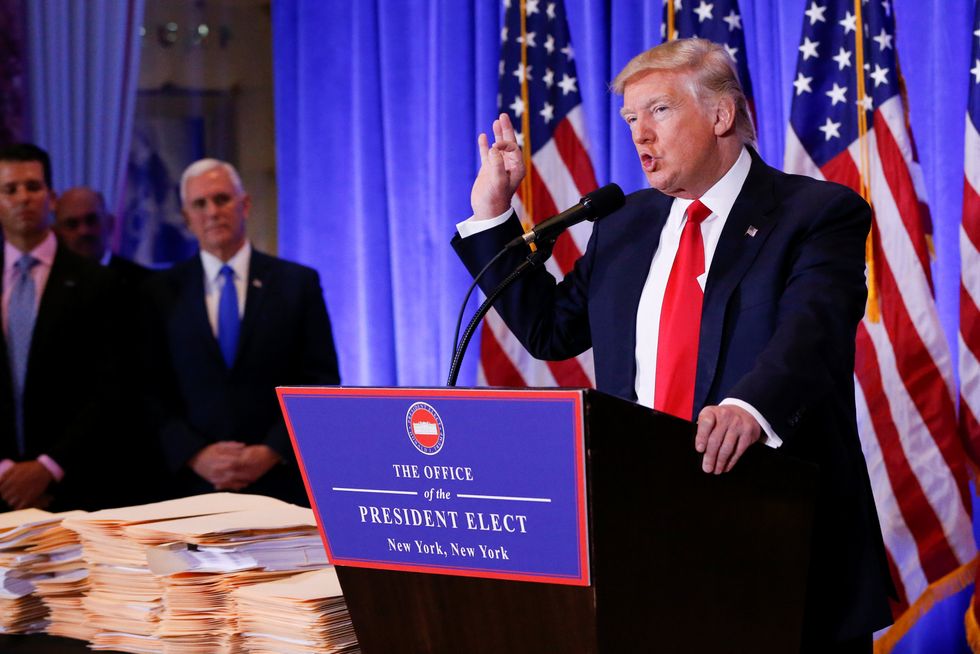 U.S. President-elect Donald Trump on Wednesday angrily denounced as disgraceful the publishing of claims he had been caught in a compromising position in Russia and said he hoped for a good relationship with Russian President Vladimir Putin but could not guarantee it.

"It’s all fake news, it’s phony stuff, it didn’t happen,” Trump said of a dossier that makes salacious claims about him.

Trump, who was briefed by U.S. intelligence officials about Russian hacking of the 2016 U.S. election, said it was disgraceful that information from that briefing had been made public and he denounced “sick people” who “put that crap together.”

“It should never have entered paper,” Trump said in a news conference days ahead of his inauguration. The Republican said U.S. intelligence agencies might have leaked the information.

Trump, who takes office on Jan. 20, acknowledged that Russia likely hacked the Democratic National Committee and the emails of other top Democrats during the election, but defended his goal of better ties with Moscow.

"If Putin likes Donald Trump, I consider that an asset, not a liability," Trump told about 250 reporters jammed into the lobby at his New York offices.

The dossier, which emerged late on Tuesday, was first reported by CNN. BuzzFeed published detailed elements of the report.

Two U.S. officials said Tuesday evening that the allegations, which one called "unsubstantiated," were contained in a two-page memo appended to a report on Russian interference in the 2016 election that was presented last week to Trump and to President Barack Obama.

The Republican president-elect has long said he hopes to improve ties with Moscow, but his plans have come under intense scrutiny after U.S. intelligence agencies concluded that Russia used cyber attacks and other tactics to try to tilt the presidential election in his favor over Democratic candidate Hillary Clinton.