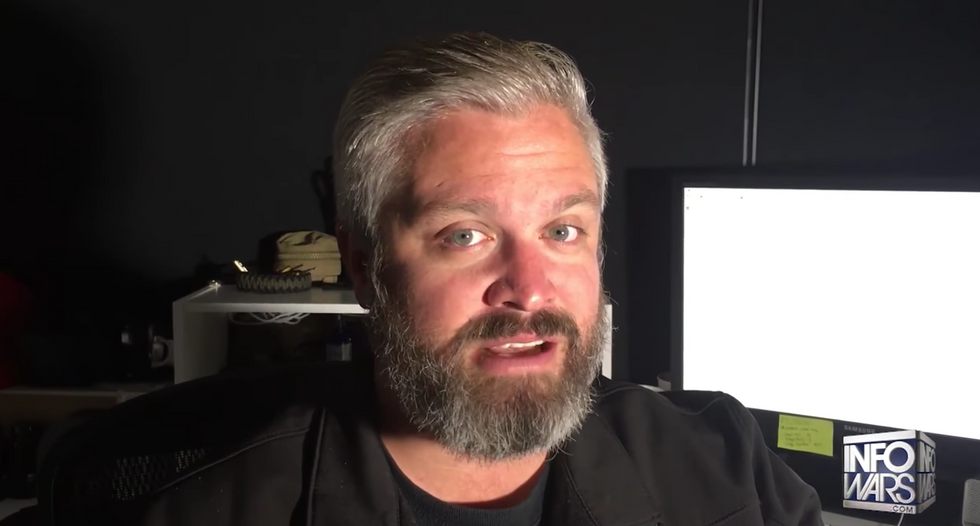 In a statement to RawStory, Joe Biggs called the "the fact tweets were dug up from 5 years ago" a "big disturbing," but explained they "were a cry for help" during a difficult time in his life.

"I feel as if this was done to just be a hit piece to go after Right Side and Trump," Biggs said. "In my opinion the fact tweets were dug up from 5 years ago is a bit disturbing. I don't think anyone is who they were completely 5 years ago, but this article dragged up a dark time in my life that was horrible for me, my family and all my friends."

Biggs explained that he'd just left the ARMY on medical retirement when he sent the tweets.

"I became very depressed and turned to alcohol and the over abuse of painkillers that had been prescribed to me while I was in," Bigg said. "You see you can take the soldier out of the war but you can't take the war out of the soldier."

Biggs said over time he became suicidal and "decided to cry out for help."

"It's not right, it's not the most mature of ways, but I would say outlandish things on Twitter in hopes someone shocked would say 'Hey, what the hell is wrong with you?'" Biggs explained.

"Eventually I met my now wife and she helped me out," Biggs wrote. She rehabbed me back to the Joe I was before. Happy and positive. I lost family and friends during this time because I was scared and confused and didn't know how to reintegrate back into society. The ARMY prepares you for war but they never prepare you to leave war and to go back to regular everyday life."

"So yes, the things that were said were a cry for help from a guy lost," Biggs added. "Five years ago I should have been dead, but I was saved by my now wife and I am not the same person I was then as I am now. I have Daughter due to be born literally anyway now and I want to be able to provide for my family. These old tweets have been a hard look back into my past but also a reminder of where I am today and how I've grown."

In a Facebook post Tuesday, Joe Biggs announced he’d filming a gun advocacy show for Right Side Broadcasting,” boasting “it will cover all things 2A [Second Amendment]."

He also suggested followers “punch a tranny” and threatened to “punch some bitches in the face real soon.”

With Trump winning the White House, RBSN is poised to take over as the network of Trump TV. The website already live-streams most Trump events and even set up a camera in the Trump Tower lobby to record the transition. In a statement last month, RBSN said they will also receive White House press briefings.