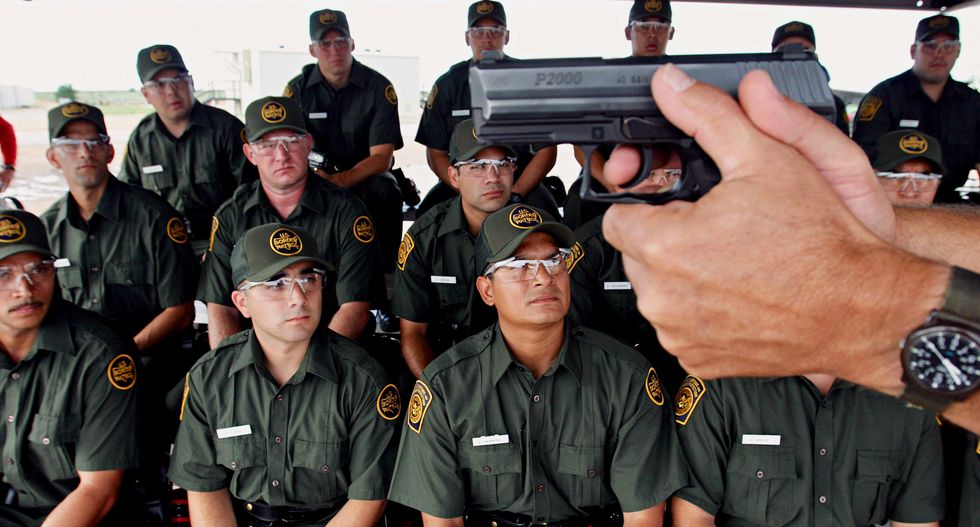 Trainees from Class 628 listen to U.S. Border Patrol agent and Class IV supervisor James Joseph Holler as he instructs them on the proper grip and safe use of their Heckler & Koch P2000 handgun during the trainees first day on the firing range at the U.S. Border Patrol Training Academy in Artesia, New Mexico, August 18, 2006. REUTERS/Jeff Topping/File Photo

A U.S. Department of Homeland Security plan to add more than 5,000 border enforcement agents will present logistical challenges and might be unnecessary, according to former government officials familiar with earlier pushes to accelerate border hiring.

Three former top officials at U.S. Customs and Border Patrol (CBP) told Reuters in interviews that ramping up hiring at the agency, as outlined in a directive on Tuesday, would be expensive, while rapid expansion poses the risk of corruption if screening protocols for recruits are relaxed.

The officials said the agency should get what it needs to secure the border, but they questioned whether such a major staff expansion was necessary, noting that apprehensions at the border have dropped.

"Congress is going to be looking at this very carefully and looking for justification for this kind of money to make sure they don't write a check that is not necessary," said W. Ralph Basham who headed U.S. Customs and Border Protection during the George W. Bush administration. "The question will be do we need more agents or do we need money for technology and infrastructure," he said.

Additional enforcement officers are central to President Donald Trump's sweeping plan to crack down on illegal immigration, outlined in Jan. 25 executive orders on border security and interior enforcement. Tuesday's Homeland Security guidance for implementing those orders called for adding more than 5,000 border patrol agents and 10,000 Immigration and Customs Enforcement, or ICE, officers, who enforce immigration laws in the country's interior, among other duties.

The White House and Department of Homeland Security did not respond to a question about the rationale behind the number of personnel requested.

"At the end of the day, the goal is to get control of the border and enhance the security of the country," said White House assistant press secretary Michael Short in an email.

The proposed hiring surge would be the largest since the Bush administration, when Congress funded an expansion of border enforcement following the Sept. 11, 2001 terror attacks.

The agency was required to meet tight time requirements for hiring, said Basham who was appointed commissioner in 2006

The laser focus on quick hiring, and its cost, ended up "sucking all the air" out of other parts of the department, Basham recalled, leaving gaps for other spending needs.

Basham said he supports CBP getting adequate resources and was encouraged that the new Department of Homeland Security guidelines did not mandate a deadline to complete the hiring. But he questioned the need for a renewed expansion of the force.

More than 1.6 million migrants were apprehended trying to cross the U.S.-Mexico border illegally in 2000 compared to 400,000 last year, according to CBP statistics. "Currently the flow is not really anywhere near where it was," Basham said.

Jim Wong, who was Deputy Assistant Commissioner of CBP's Office of Internal Affairs from 2009 to 2011, said money might be better spent on other department needs.

"Throwing more human resources at the issue is not necessarily the best way to approach it," he said.

Homeland Security spokespeople declined to estimate how much the increased hiring would cost.

The 2017 fiscal year budget request for staffing at current levels of more than 21,000 border patrol agents was about $3.8 billion for salary, overtime and benefits, or about $180,000 per officer on average, although officers with different levels of seniority earn different wages. Additional costs could include housing for agents working in remote areas, equipment and support staff, former officials said.

In the last budget cycle, the agency requested funding for 300 fewer officers than the year before to instead invest in replacing aging radios and vehicles. CBP said the request reflected "realistic agent hiring expectations."

"When you speed up the process and don't take the requisite time you pay a price later in things like corruption," Kerlikowske said.

During the Bush-era hiring surge, the Border Patrol had problems screening candidates, and internal corruption cases soon spiked, according to congressional testimony and government documents.

Congress then passed the Anti-Border Corruption Act in 2010, which made polygraph testing mandatory for all border patrol agents. Since then, tests have revealed candidates who were compromised by drug cartels or were heavy drug users themselves.

But the polygraph test and other controls have also slowed the hiring process. A 2012 GAO report found that between 2008 and 2012, only 40 percent of applicants passed their polygraph exams.

Kerlikowske said when he left the agency at the time of Trump's inauguration there were 1,200 authorized but unfilled openings for border patrol agents due to the difficulty of finding and vetting enough qualified candidates.