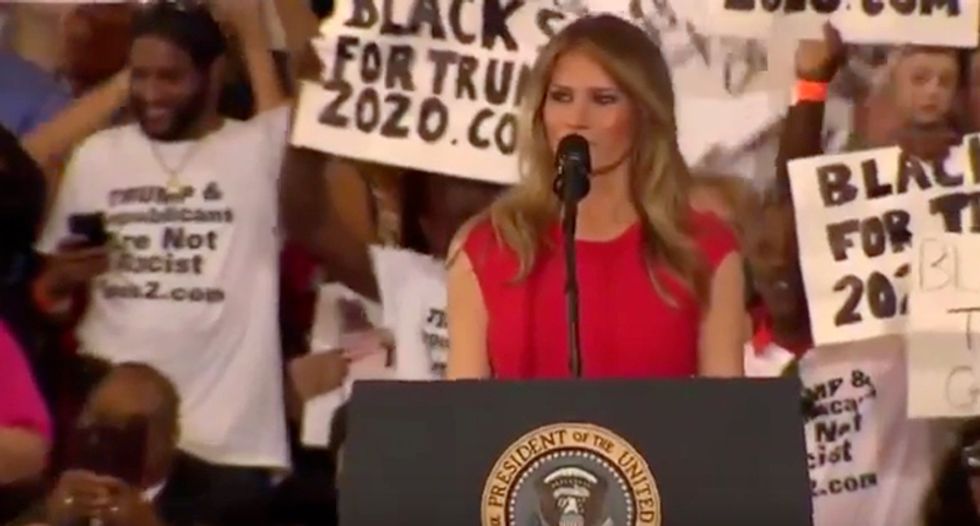 First Lady Melania Trump, usually a demure and soft-spoken presence at her husband's side, broke with form, reciting the Lord's Prayer before issuing a scathing rebuke of his enemies and her critics at a campaign-style stop in Florida.

Preceding her husband on the dais at a rally in the city of Melbourne not far from Orlando, the first lady started her remarks with the words "let us pray," before beginning her recitation of the well-known Christian prayer.

"Our Father, who art in Heaven, hallowed be thy name. Thy Kingdom come, thy will be done, on Earth as it is in Heaven," Mrs Trump read from the lectern, wrapping up the roughly half-minute-long prayer with an "Amen."

She then launched into an uncharacteristically strident defense of her husband -- and her own brief tenure as first lady.

"A nation committed to a greater civility and unity between people from all sides of the political divide. I will always stay true to myself and be truthful to you, no matter what the opposition is saying about me," the first lady said, wearing a red frock with a fitted waist and flared skirt, her mane of blonde hair blowing slightly in the breeze.

"I will act in the best interests of all of you. I'm committed to creating and supporting initiatives dear to my heart. Which will have impact on women, and children all around the world," she said.

"My husband is creating a country of great safety, and prosperity," she said before introducing President Donald Trump, ceding the podium to cheers and applause.

The first lady has been a rare presence with her husband since the inauguration. To the dismay of some critics, she has decided to continue living at their palatial residence in Trump Tower in New York until their 10-year-old son Barron finishes the school year.

Purists and traditionalists have been disappointed that the first lady has not kept with precedent and immediately joined her husband in the White House residence.

The poised, impeccably dressed Melania -- a former model from Slovenia -- is 24 years younger than her 70-year-old billionaire husband. She is Trump's third wife.

Her modeling career brought her in the mid-1990s to the United States, where she met the real estate mogul and reality television star she would eventually marry.

President Donald Trump hits the campaign stump for a rally in Melbourne, a city on Florida's famed Space Coast, seeking to reconnect with his tribe of largely white, male middle-class voters.

He delivered a speech lasting about 45 minutes in what was billed by the White House as "a campaign rally for America."

Criticism of Melania has been mild compared to the blistering attacks lodged against her embattled husband, who is engaged in open warfare with the media and who faced major political contretemps over allegations of possible ties between his senior aides and officials in Russia.

The controversy led to the resignation earlier this week of national security adviser Michael Flynn.