Pence, Bannon demand conservatives 'have our back' and unite behind Trump 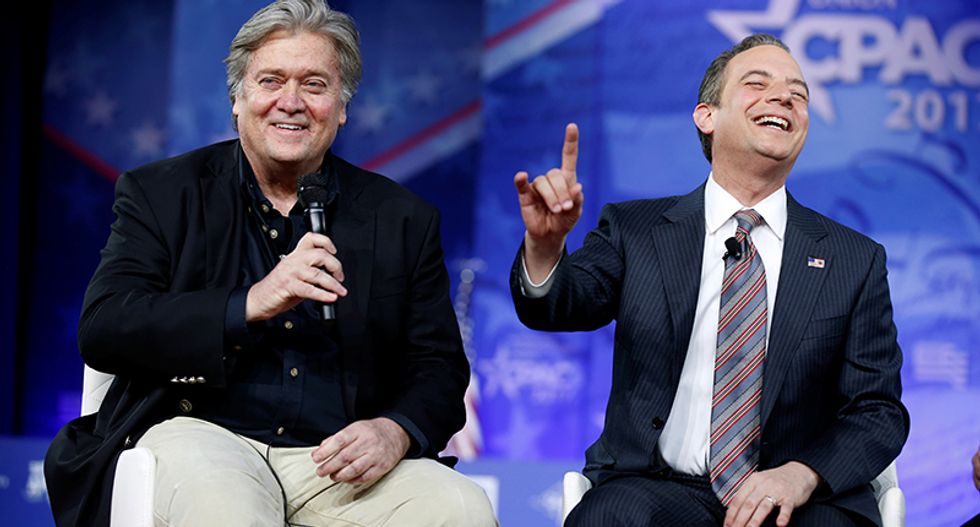 "My friends, this is our time. This is the chance we've worked so hard for so long to see. This is the time to prove again that our answers are the right answers for America," Pence said.

Trump was due to address CPAC on Friday.

Earlier on Thursday, Trump's chief strategist, Steve Bannon, known as a forceful influence in the White House, made a rare public appearance to appeal for support for the Republican president.

"We want you to have our back" in upcoming battles, Bannon told the gathering, denouncing media criticism of Trump. He appeared onstage along with White House chief of staff Reince Priebus.

The early days of the new administration have been marked by deep post-election divisions between Trump backers and liberals over the president's temporary travel ban on people from seven Muslim-majority countries, as well as moves to increase deportations of illegal immigrants and build a wall on the border with Mexico.

While conservatives celebrate Trump's role in delivering them victory in November's election, his agenda veers from traditional right-wing principles like limited government and open trade.

Republicans who control the White House and Congress are also arguing over how to dismantle and replace former Democratic President Barack Obama's landmark healthcare law.

Bannon and Priebus both sought to dispel a sense of disorder in the White House portrayed in media accounts.

Referring to media criticism of Trump and echoing the president's attacks on the media, Bannon warned: "It's going to get worse every day" as Trump presses forward with his 2016 campaign promises.

"If you think they're going to give you your country back without a fight you are sadly mistaken," said Bannon, who formerly ran the confrontational right-wing website Breitbart News. He blamed the "corporatist, globalist media that are adamantly opposed to an economic nationalist agenda" under Trump.

The CPAC conference, once a fringe event but now decidedly in the Republican mainstream, is being attended by an estimated 10,000 activists.

"Every great movement ends up being a little bit sclerotic and dusty after a time, and I think they (conservatives) need an infusion of energy," Conway said.

CPAC organizers are trying to steer clear of controversy over the alt-right movement, a loose grouping that includes neo-Nazis, white supremacists and anti-Semites whom Trump has been slow to denounce. Breitbart has a following among some of those groups and Bannon in the past had called the media organization a platform for the movement.

Some Breitbart staffers were scheduled to participate in CPAC panel discussions.

"We don't think there's any role for the alt-right in the conservative movement," Matt Schlapp, head of the American Conservative Union, which organizes CPAC, said in a phone interview.

Just a month into his presidency, Trump is already being compared by some conservatives to their hero, former President Ronald Reagan, who swept into office in 1981 with a small-government, free-trade, tax-cutting agenda that energized the Republican right wing and molded the views of many of the CPAC faithful.

Trump so far has been "pitch-perfect with conservatives as he starts his administration," said Schlapp.

Even so, some conservatives, including some at CPAC, are nervously watching Trump.

Trump has proposed a major expansion of government to police immigration. He has already canceled a trade deal with Asia-Pacific neighbors and sharply criticized one among the United States, Mexico and Canada.

On taxes, Trump has backed cuts in rates, but his position on a Republican tax package under debate in Congress is unclear.

Schlapp credited Trump with naming the most conservative Cabinet in a half-century and nominating a Supreme Court justice, Neil Gorsuch, who has conservatives' blessings.

Trump has also thrilled conservatives by working hand in glove with congressional Republicans on overturning or gutting a handful of Obama-era regulations, including one that prevented coal companies from dumping waste into rivers and streams.