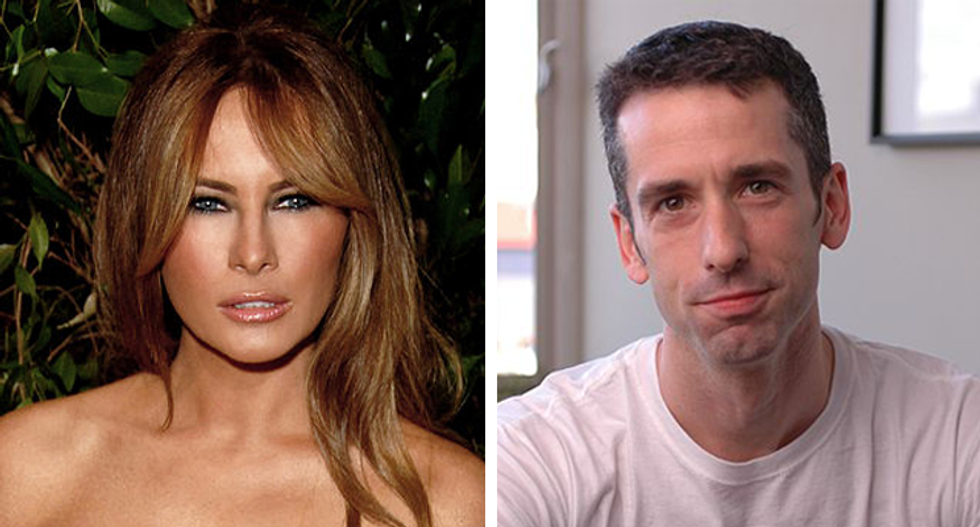 “God knows there’s enough hate in the world and I don’t want to add to the sum total, but forgive me, I have got to get this off my chest: I f*cking hate Melania Trump,” Savage said during his latest installment of his “Savage Love” podcast, the Wrap reports.

“I’m not alone in loathing Donald Trump’s third wife,” he continued. “She’s married to a misogynist after all. Odds are good her husband hates her too.”

“But there are some folks on the left who not only don’t hate her, they view her as some sort of sympathetic figure,” he said. “The pretty princess in the tower locked up by the orange ogre with the bad combover, a princess desperately blinking out distress signals during swearing-in ceremonies and inaugural balls.”

Savage argued that liberals have an “undeservedly charitable view” of the First Lady, insisting they believe physically attractive people must also be pretty on the inside.

“It’s definitely not true in this case,” Savage said. “Mrs. Trump, Melania Trump, is as ugly on the inside as she is pretty on the outside.”

Savage noted that “Pretty Melania” is also a birther who “went on TV to push the same racist conspiracy theories about Barack Obama that her husband did.”

“She’s an immigrant who doesn’t give a sh*t about the plight of other immigrants,” he said. “She’s famously a plagiarist. And she’s brought ruinous lawsuits against journalists and bloggers accusing them of among other things, potentially interfering with her ability to profit off her role as first lady.”

Comparing Trump with her predecessor, Savage argued there’s a double standard when it came to criticisms of former First Lady Michelle Obama.

“I don’t know if you can impeach a first lady or how that would work,” Savage said. “But I do know that we would have found out pretty f*cking fast if Michelle Obama had said the same during her husband’s presidency.”