Seth Meyers slams Trump's Meals on Wheels cuts: Your heart is so small it makes your hands look big 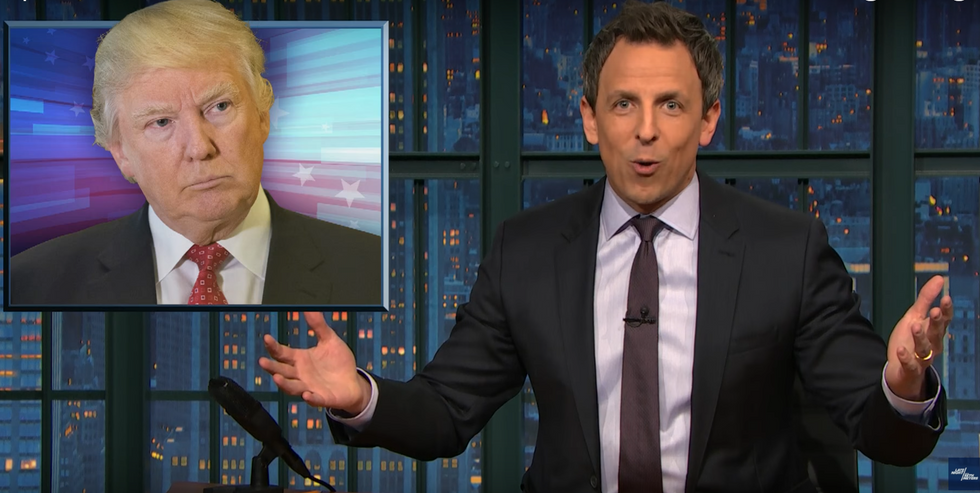 President Donald Trump is having a bad week and seems to be taking it out on everyone, "Late Night" host Seth Meyers explained Thursday. Perhaps that's why his budget blueprint was so heartless.

Trump's approvals on health care are anemic at best, a recent Fox News poll revealed. At the same time, his own party is attacking him on health care, his wiretap claims and more. Meyers played a May 2016 clip of Trump saying that Americans would win so much they "would get sick and tired of winning."

"Are you sick of winning yet?" Meyers asked. "Because if you are you better get to the doctor before Trump takes away your health care."

Trump then pivoted to begging for applause by bashing Hillary Clinton. "Wow, you guys are still doing 'lock her up,'" Meyers noted. "But hey, I get it, when you go see Billy Joel you want to hear 'Piano Man.'"

He went on to note that Trump told his crowd "some of you were bad students" but that even they could understand what he was going to explain to them. "I love how Trump is willing to go in front of his voters and tell them, 'Some of you are idiots,'" Meyers joked.

He said that it reminds of a famous John F. Kennedy quote and played a video of a fake JFK address in which Kennedy said "Ask not what your country can do for you -- ask what you can do for your country. And if you're too stupid to understand that ask a friend what I mean. Then ask yourself why you're so dumb. And if you can't answer that, you're an idiot."

He went on to mock Trump for trying to pivot to taxes, admitting that he wished they could have started with taxes first but had to get through repealing and replacing Obamacare. Interestingly, Trump himself said that the first thing he would do on day one of his administration was repeal and replace Obamacare.

Trump then went on Fox News and spread a conspiracy theory that former President Barack Obama set up Obamacare to fall apart in 2017. Meyers found the theory unbelievable that Obama would design his signature policy to collapse in just six years.

Meyers explained that Trump's bill is falling apart because it crushes rural white voters who voted for Trump. When asked about it, Trump even admitted it. "For any other president it would be a smoking gun, but for Trump it's a guy smoking. 'Yeah I know. I know. F*ck 'em.'"

Just when things couldn't possibly get worse, Trump unveiled a budget blueprint that made things even worse for Trump's supporters. He said he saw cuts to the EPA coming and even the National Endowment for the Arts but the cuts to Meals on Wheels were absurd.

"Meals on Wheels?!?" Meyer exclaimed. "How dead inside do you have to be to not want old people to get food? Your heart is so small it makes your tiny hands look like catcher's mitts. Old people voted for you! Your key demographics were old people and older people. They believed you when you said you cared about them. There's nothing more low-life than lying to the elderly. You should know that. You're 70."

See the full clip below: