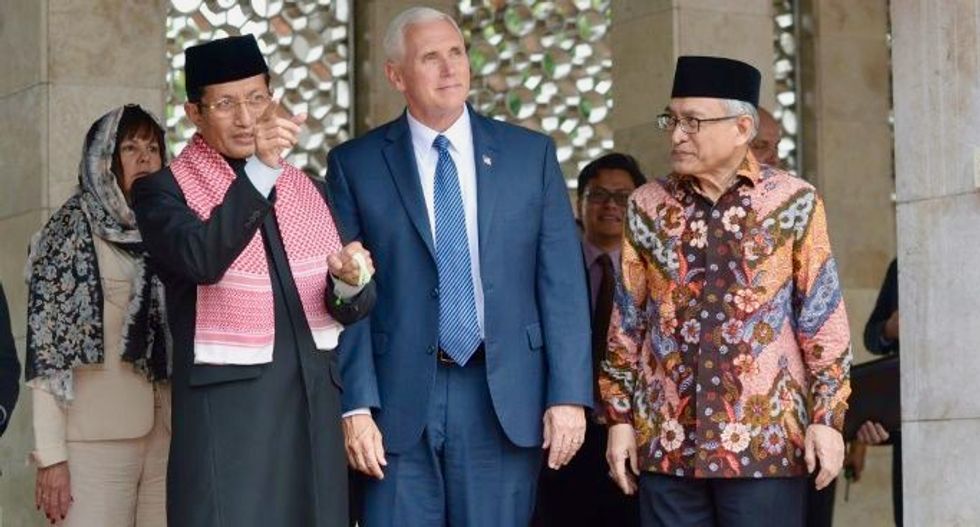 US Vice President Mike Pence on Thursday toured the biggest mosque in Muslim-majority Indonesia during a visit seen as a highly symbolic gesture from an administration that has been accused of stoking Islamophobia.

After kicking off his stop in the world's most populous Muslim-majority country by praising its moderate Islam as "an inspiration", he visited Istiqlal Mosque, whose vast white dome towers over downtown Jakarta.

He slipped off his shoes before being guided around the mosque, which is also the biggest in Southeast Asia, accompanied by his wife and two daughters in headscarves, as well as Istiqlal's grand imam.

His visit represents the most high-profile outreach to Muslims by the Donald Trump administration since the brash billionaire came to office and echoes a similar trip by Barack and Michelle Obama in 2010.

But his administration has also tried to ban travellers from several Muslim-majority nations, citing concerns about terrorism -- an effort currently being challenged in US courts.

As a presidential candidate, Trump often appeared to flirt with the far right as he railed against "radical Islamic terrorism".

But Pence struck a starkly different tone during his visit to Indonesia, which has often been praised as a successful Muslim democracy where most practise a moderate form of Islam and coexist peacefully with substantial religious minorities.

"Indonesia's tradition of moderate Islam is frankly an inspiration to the world and we commend you and your people," he said after talks with President Joko Widodo at the presidential palace in Jakarta.

"In your nation as in mine, religion unifies, it doesn?t divide."

Pence is currently on a tour of South Korea, Japan, Indonesia and Australia that is aimed at smoothing some of the rougher edges of Trump's rhetoric.

In South Korea and Japan, Pence played down protectionist declarations of "America first" and reaffirmed US treaty commitments to the security of the two countries as tensions rise over Pyongyang's nuclear programme.

After meeting with representatives of the Association of Southeast Asian Nation's at the regional bloc's headquarters in Jakarta on Thursday, Pence announced Trump would attend three summits in Asia in November, a further sign that his administration is seeking to reassure regional allies.

He will attend the US-ASEAN and East Asia summits in the Philippines and a gathering of the Asia-Pacific Economic Cooperation group in Vietnam.

At the mosque in Jakarta, Pence and his family also toured the cavernous main prayer room -- which was empty during his visit but fills up with tens of thousands of worshippers during key dates in the Muslim calender -- and admired the towering dome.

A man showed the US leader how he beats a carved drum next to the courtyard, a local addition to the traditional call to prayer.

Pence then held an interfaith dialogue behind closed doors with representatives of the Christian, Buddhist, Confucian, Hindu and Muslim faiths.

The vice president's upbeat tone about Indonesian Islam contrasts with growing concerns inside the country that the traditionally inclusive brand of the religion is under threat from hardliners and a trend towards conservatism.

On Wednesday Jakarta's Christian governor Basuki Tjahaja Purnama was defeated in a run-off election to lead the capital by a Muslim challenger who was accused of pandering to hardliners to win votes.

Purnama, known by his nickname Ahok, lost after his once-unassailable lead in opinion polls was dented when he was put on trial for blasphemy in a case criticised as politically motivated.

After his talks with Widodo, Pence also said the US was committed to building a stronger defence partnership with Indonesia to combat terrorism, and guaranteeing freedom of navigation in the South China Sea, where Indonesian and Chinese vessels have recently clashed.