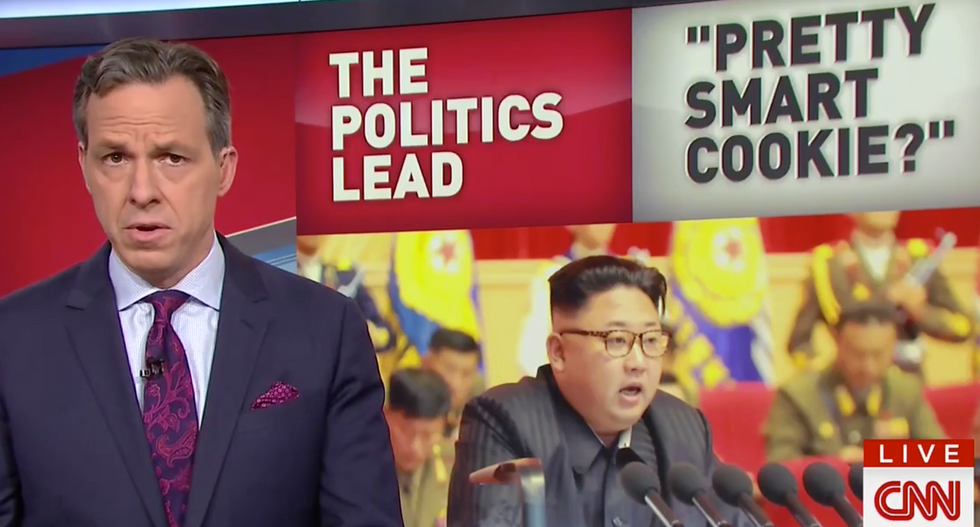 CNN’s Jake Tapper on Monday issued a scathing takedown of Donald Trump’s attacks on “the Constitutional systems we have in place to protect the nation any theoretical, would-be dictator,” noting they come at a time “when President Trump has shown unusual actual outreach to a number of actual dictators.”

“Journalists are the enemies of the people, but [Trump] would be honored to meet Kim Jung-Un,” Tapper noted a the onset of “The Lead.”

“President Trump today saying he would be ‘honored’ to meet with North Korea’s despotic dictator under the right circumstances, and that is not even the first maniacal and murderous strongman he has opened up to in the past day,” Tapper added.

The CNN host pointed to Trump’s desire to change the Senate filibuster, before turning to Chief of Staff Reince Priebus’ assertion on Sunday that the Trump administration is “looking” at ways to change libel laws to make it easier to target journalistic institutions.

“The White House is now acknowledging that it has spent time and your tax dollars trying to figure out a way to change the modern legal interpretation of the First Amendment to the Constitution’s guarantee of freedom of the press,” Tapper said.

“James Madison be damned,” he added.

Tapper pointed out that Trump’s desire to change the Senate filibuster and libel laws, which “protect the nation from any theoretical, would-be dictator,” comes as the president continues his outreach to despotic dictators with little regard for the rights and freedoms afforded by the U.S. Constitution.

Referring to the president’s claim that Kim Jung-Un is a “pretty smart cookie,” Tapper explained, “Kim Jung-Un had his uncle murdered, that does not make Kim Jung-Un a ‘smart cookie,’ that makes him a murderer.”

“The Lead” host then turned to Trump’s praise of Rodrigo Duterte, stating the Philippines president okayed the “extra-judicial killings of at least 7,000 Filipino citizens by the police” and has in the past said “some journalists should be assassinated.”

“Equating brutality and despotism with leaders—that’s not an American value,” Tapper said.