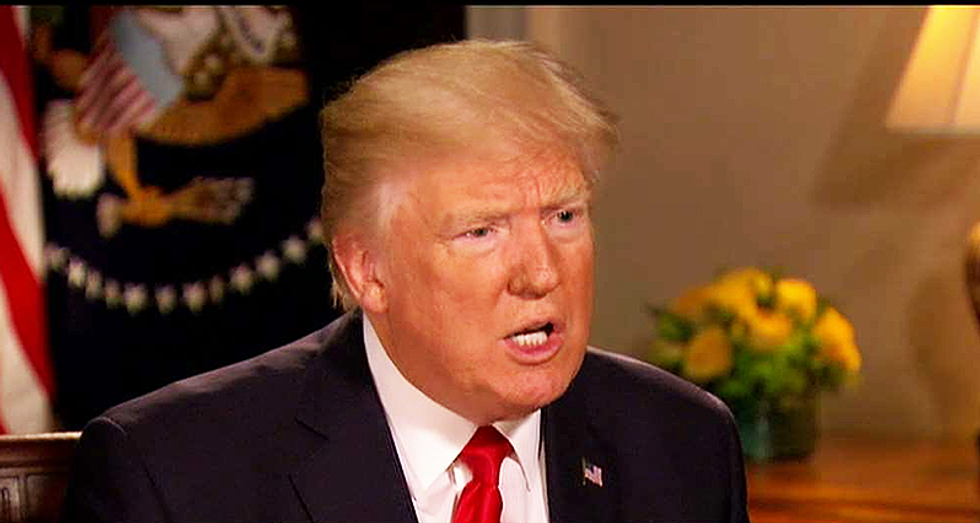 Modesty is not the first word that comes to mind when one thinks of either Alan Dershowitz or Donald Trump. Still, it’s remarkable that they should resort to the identical words to express their respective self-infatuations.

Dershowitz, a regular Fox News columnist, leaped forward with a declaration of his own singular brilliance on Thursday after James Comey’s testimony before the Senate Intelligence Committee:

In his testimony former FBI Director James Comey echoed a view that I alone have been expressing for several weeks, and that has been attacked by nearly every Democratic pundit.

I shall return to that “I alone,” but only after clarifying that Dershowitz found Comey praiseworthy for

In a subsequent Twitter exchange, Dershowitz defended himself against former Obama ethics czar Norm Eisen, who objected that (to translate from Tweetspeak to English) Congress has limited the presidential exercise of the authority to fire, and that the criminal law is clear that such firing cannot be justified when the firer-in-chief acts with “corrupt intent.”

Dershowitz thinks Democratic pundits rushing to condemn Trump have “endangered our civil liberties and constitutional rights.” Although he has been critical of some of Trump’s most egregious initiatives, when it comes to his powers over law enforcement he is most impressed by the president’s singular majesty. Pundits, civil servants and other lowlifes be damned! In Dershowitz’s view, the president’s entitlement to command the legal authority of the government is absolute. The president’s right to tell anyone in the executive branch “You’re fired!” is a guarantor of the constitutional rights of the citizens!

The perversity of such thinking is hard to surpass. It’s as if, in this creative version of originalism, lèse-majesté turns out to be what Jefferson and Madison had in mind.

The right wing enthuses about this imperious side of Alan Dershowitz. Since a 400-pound guy must have been left squatting on top of the tweeter-in-chief’s phone on Thursday, it was left to Donald Trump Jr. to tweet his approval of Dershowitz’s acumen and his affirmation that when Trump wants to control somebody, he does so in no uncertain terms.

But leaving aside the legal rights and wrongs, what’s striking is the language with which Dershowitz rises to the legalistic defense of Trump’s right to fire at will. Recall that “I alone.”

Almost a year ago — doesn’t it feel like an eternity and a half? — Trump told the Republican convention that had just nominated him for president: “Nobody knows the system better than me, which is why I alone can fix it.” There it is again: “I alone.”

Insofar as Trump has a world view — insofar as it can be said that he believes in anything at all — it is a gross form of malignant narcissism. More power, more wealth — that’s about it. He is the superhero, the Lone Developer, standing tall against a petty, nasty world composed of obstructionist losers, clamorous pygmies who have the audacity to obstruct his acquisitions of casinos, women and other properties. To those who are loyal to him will accrue the spoils.

By “the system” — “the rigged system” — Trump meant the “political and economic system” that has been “rigged” for the “exclusive benefit” of “our nation’s most powerful special interests.” Of course, Trump insisted that Hillary Clinton was herself the pure product of “the system,” so it should have followed — if anything Trump says can ever be said to follow any logical sequence — that the nasty woman herself should have been able to fix it just as well. But never mind.

Dershowitz fancies that when he defends Donald Trump against the imputation that he has obstructed justice, he is defending the rights of all citizens, who presumably have no legitimate reason to fear when El Caudillo of Mar-al-Lago exercises his prerogatives to rule unimpeded.

“I alone” is the operative theme. This is what a collapsing democracy has come to. A president commands, and a putative civil libertarian cheers.