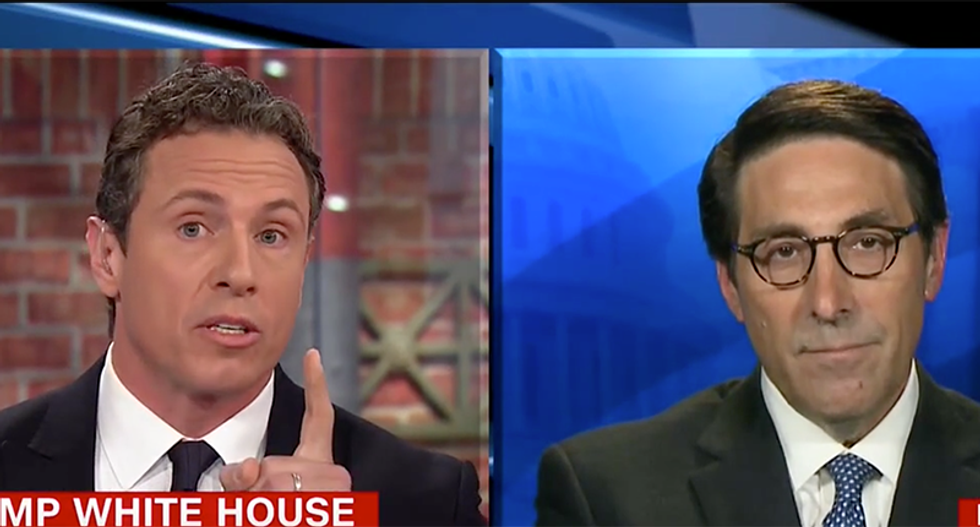 President Donald Trump's morning tweet was to promote a "Fox and Friends" appearance by new attorney, Jay Sekulow, after a disastrous interview over the weekend with Fox News' Chris Wallace. Sekulow spent Monday morning trying to clean up the Wallace interview and maintain that his client isn't being investigated. But it was the CNN interview he did after that made the real fireworks.

"It would not violate the law," Sekulow maintained.

He then went on to heap praise on Trump for both the size of his social media following and the way he uses it.

"What the president did using social media will be in the history books," Sekulow said.

"You know what's going on," co-host Steve Doocy said. "When you look at the political atmosphere and the way The Washington Post goes after the president, they go after him every day. You go on their website right now there are 25 anti-Trump stories.

"And they're not breaking stories," echoed Brian Kilmeade. "These people are picking up the phone, they're calling them who want to destroy the president."

Sekulow faced tougher questions from CNN’s Chris Cuomo. He tried to maintain that Trump was tweeting a response to The Washington Post story, claiming the story was not factual because it sourced five anonymous people.

Cuomo went on to ask why Trump nor Sekulow called Mueller to ask if the president is under investigation. That's when Sekulo freaked out, flailing angrily.

"And why you haven't picked up that phone to find out is a little odd," Cuomo said. "If I hired you I'd want you to make that phone call."

"Heh, well, you haven't hired us because we represent the president of the United States," was his only retort.

"That's good, I'm glad to hear that," Sekulow said laughing, not realizing it was an insult.

Cuomo went on to say that Sekulow could very easily get the answers if he wanted them, implying that if he did call Mueller he might find Trump is actually under investigation, effectively blowing the White House talking point.

"Look, you're asking me to pick up the phone on an investigation we don't even know exists," Sekulow said.

"No, I'm not," Cuomo said. "You know it exists. You know Mueller is looking at this. Why don't you just pick up the phone and find out if it matters so much to the president, whether or not he's being looked at, find out."

"I'm just one lawyer!" Sekulow exclaimed at one point. "I haven't made that call. That's the end of that line of inquiry,"

Trump lawyer goes down in flames when CNN's... by sarahburris

Part 2: Trump lawyer goes down in flames when... by sarahburris