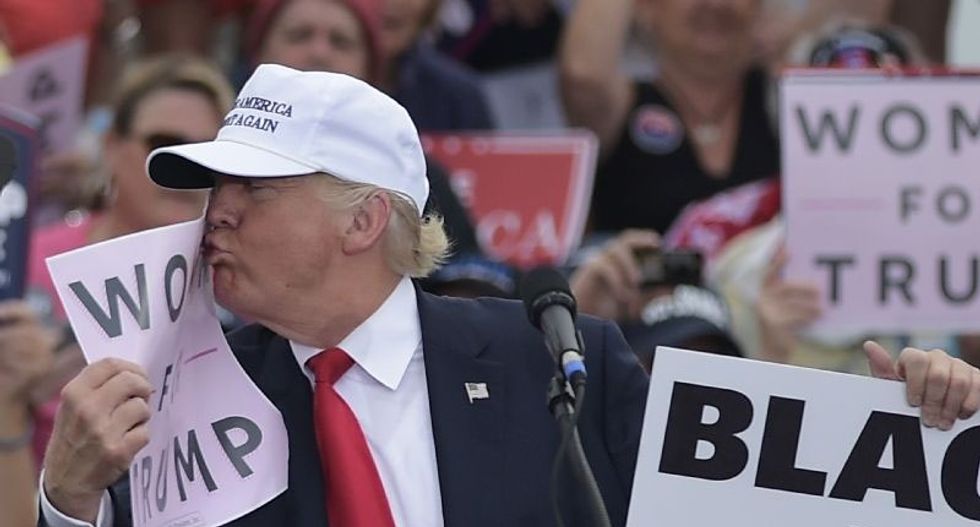 Perhaps something useful can be accomplished as a consequence of transparently repulsive Donald Trump: rousing Americans to reconsider honoring U.S. presidents with Presidents’ Day, and replacing it with a holiday that recognizes a more respectable group of people.

Trump’s misogyny has long inflamed Democrats, but now even Republicans, including Paul Ryan and Lindsey Graham, have expressed revulsion over his “bleeding badly from a face-lift” insult of Mika Brzezinski. For both Republicans and Democrats, recent history tells us that drone bombings of 117 civilian noncombatants, whistle-blower persecutions, and banker stay-out-of-jail-free cards are not politically incorrect offenses. But a transparent misogynist—now that’s a politically incorrect offender.

So, one way to eliminate Presidents’ Day would be for Americans to discover that Trump is not even the worst misogynist or worst sexual predator president ever. Below are some presidents’ misogyny and sexual predatory practice lowlights. Spoiler alert: Except in the arena of transparency and bragging, Trump cannot out-scum Grover Cleveland or Thomas Jefferson, or maybe even Ronald Reagan.

1. Grover Cleveland: Honoring Presidents’ Day in 2015, the Boston Globe described how Americans once elected a president with great integrity: “Not since George Washington had a candidate for president been so renowned for his rectitude. ‘Grover the good,’ his supporters dubbed him.”

The 22nd and the 24th president, the only one to serve two non-consecutive terms, was a crusader against corruption. Some accounts include that Cleveland was alleged to have fathered an illegitimate child and was taunted in the 1884 presidential campaign with, “Mama, where’s my papa?” Cleveland honorably handled this matter, was victorious, and his supporters had the last laugh, retorting, “Gone to the White House. Ha! Ha! Ha!”

For several months in 1873, Cleveland courted 38-year-old sales clerk Maria Halpin; then Cleveland date-raped her. Journalist Charles Lachman, author of A Secret Life (2011), discovered an affidavit from Halpin about her sexual assault by Cleveland “by use of force and violence and without my consent,” she stated. When Halpin threatened to notify the authorities, she said Cleveland told her “he was determined to ruin me if it cost him $10,000.” Halpin gave birth in 1874 to a baby boy in a hospital for unwed mothers in Buffalo and Cleveland arranged to have the child forcibly removed and placed in the Buffalo Orphan Asylum. Halpin was thrown into the Providence Lunatic Asylum but released after it became clear that her incarceration was the result of an abuse of power by political elites.

Cleveland won the Democratic nomination for president in 1884, and the media exposed the existence of Cleveland’s illegitimate son. In response to that, Grover Cleveland’s team conducted a malicious smear campaign against Halpin, falsely claiming that she drank to excess and was sexually active with at least three (and possibly four) married men; and that Cleveland honorably took responsibility for the child’s conception because he was the only bachelor among Halpin’s sexual partners.

The truth was that Halpin was the opposite of promiscuous—a widow with two young children, and a church-going woman held in high esteem by all who knew her.

The salient difference between Cleveland and Trump is their private-public congruence. Trump has been accused of sexually assaulting 12 women. However, unlike Cleveland, Trump has publicly bragged—most notably in several interviews with Howard Stern—about his predatory behaviors, for example, going backstage at beauty pageants to ogle naked contestants changing clothes. And Trump is tweet-transparent in his misogyny.

2. Thomas Jefferson: The founding father and author of the Declaration of Independence is so venerable as to be one of four presidents on Mount Rushmore as well as having a memorial in Washington D.C. While many of his contemporaries saw him as the supreme hypocrite, it is only recently that popular culture (for example, Lin-Manuel Miranda’s musical, Hamilton) has caught up with Jefferson’s hypocrisy and ignobility.

Henry Wiencek’s 2012 Master of the Mountain: Thomas Jefferson and His Slaves is one of many books that document how Jefferson was a hypocrite in many regards, espousing freedom while holding slaves; advocating revolutionary militancy while exhibiting chicken-hawk cowardice; and promoting frugality while amassing huge debt with an extravagant lifestyle. More than simply hypocritical, the case has increasingly been made that Jefferson was a sexual predator.

“Recent historical examinations of records at Jefferson’s Monticello plantation have provided support for contemporaneous accounts of Jefferson having sexual relations with at least one other slave girl beside Hemings and possibly more. . . .The historical record increasingly makes Jefferson out to be a serial rapist, exploiting at least one and possibly more girls who were trapped on his property, who indeed were his property, and thus had little choice but to tolerate his sexual advances.”

“The Monster of Monticello” was the title of a 2012 New York Times review of Wiencek’s book. According to Wiencek, “The enslaved people were yielding him a bonanza, a perpetual human dividend at compound interest.” While Jefferson ultimately freed the children he had with Slly Hemings (in what is believed to be a deal he made with her so she would not run away from him in Paris), Jefferson’s slave breeding enhanced his personal wealth.

3. Ronald Reagan: Ronald Reagan’s all-American pristine public image is certainly the opposite of Trump’s, but what was Reagan’s private reality? In 1991, the mainstream press ridiculed Kitty Kelley’s account (in her book Nancy Reagan) of actress Selene Walters’ claim that Ronald Reagan date-raped her in the early 1950s. The ridicule continued even though People magazine got Walters to repeat this story almost verbatim. Walters did correct some of Kelley’s version, as Walters said, “I opened the door. Then it was the battle of the couch. I was fighting him. I didn’t want him to make love to me. He’s a very big man, and he just had his way. Date rape? No, god, no, that’s [Kelley’s] phrase. I didn’t have a chance to have a date with him.”

Walters’ story was mostly dismissed, but in 2011, actress Piper Laurie wrote about her sexual encounter with Reagan. They met when Laurie was 18 and still a virgin, and Reagan was 39, playing her father in the 1950 drama Louisa. In Laurie’s autobiography Learning to Live Out Loud, she reports that Reagan was initially the perfect gentleman, asking her mother for permission to take her out on a date. But instead of going out, Reagan took her to his home where he made hamburgers, then took her into the bedroom where he turned into a “show-off” who had sex “without grace." While Laurie did not claim that Reagan raped her, her description of Reagan’s emotional abuse following intercourse makes Walters’ claim more plausible.

Womanizing, misogynist or sexual predator presidents have actually been quite common in American history. Bill Clinton was forced to admit to his sexual escapade with Monica Lewinsky, but there were numerous other accusations. John Kennedy's biographers describe him as a compulsive womanizer, and when Kennedy’s many affairs were mentioned to Lyndon Johnson, he would competitively brag that he had more women by accident than Kennedy ever had on purpose.

The reality is that not just private sexual predatory practices but monstrous crimes against humanity are common among U.S. presidents. Numerous presidents presided over the crimes of slavery and Native American genocide, and since WWII alone, by some estimates, 20 to 30 million deaths around the world have resulted from multiple presidents’ trumped-up wars and shameful foreign policies.

With the transparently repulsive Trump, can we finally end the humiliation of Presidents’ Day and replace it with another holiday that recognizes a more respectable group of Americans? How about Mail Carriers’ Day?