'There are a lot of people injured': Hamburg under siege for G20 summit 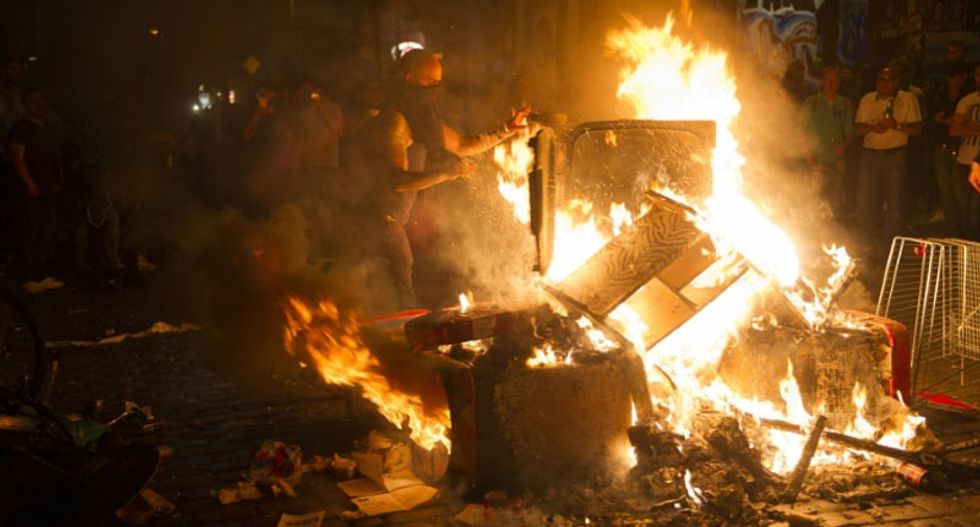 Protesters against the summit of leaders of the world's top economies have left Hamburg under siege at what was already set to be the stormiest meeting of the group in years amid disagreements on key topics including climate change, war and trade. (AFP / STEFFI LOOS)

Cars torched, delegations' tyres slashed and flares fired at helicopters: Hamburg is living up to its militant reputation with activists giving the G20 a hostile welcome -- and in imaginative ways.

On Thursday night on the eve of the summit of the leaders of the world's top 20 economies including US President Donald Trump, a protest march in this port city by 12,000 people quickly got out of hand.

After a hard core of around 1,000 black-clad militants ignored authorities' demands to remove their masks, riot police moved in with water cannon trucks and tear gas.

That set the stage for hours of running battles between police and protestors in the back streets of Germany's second city that left 111 police officers injured, authorities said.

It was unclear how many protestors were hurt. Organiser Andreas Blechschmidt criticised what he said was a heavy-handed and "massive" police response with batons.

"The police should have reacted proportionally... It wasn't necessary. There are a lot of people injured," Blechschmidt said on N-TV. Around 30 people were arrested.

"War, climate change, exploitation are the result of the capitalist system that the G20 stands for and which 20,000 police are here to defend," demonstrator Georg Ismail told AFP.

Trouble resumed early Friday as well-organised groups of protestors tried to outfox the 20,000 heavily equipped officers locking down central Hamburg and prevent world leaders even getting to the summit venue.

Tyres on cars from the Canadian delegation were slashed, police said.

With smoke rising over the city, groups of 50-100 people blocked intersections and roads meant for delegations' noisy, flashing motorcades to shuttle between meetings, AFP reporters said.

Police, with a sweeping bird's eye view through half a dozen helicopters, coordinated from a high tech centre, were quick to respond with riot police, water cannon and tear gas.

US President Donald Trump's armoured presidential limo dubbed "The Beast" made it through but other leaders including the president of Indonesia and delegations were delayed, reporters said.

Local resident Benjamin Laub, 53, said his neighbourhood has resembled a zone "under a state of emergency" for days.

"For a week we've heard the choppers above all the time. The buses don't run, people leave their cars at home, they walk or ride bicycles. I'm carrying my passport for the first time in Germany (because of police checks)," said the hockey trainer.

A livid Markus Munch, 48, speaking on his bike near Trump's residence in a plush area beside the Alster lake twinkling in the summer sunshine, had little sympathy for the "idiots" demonstrating.

"It's a total catastrophe that a minority can just riot like this," Munch told AFP "These idiots have nothing better to do than to demonstrate. They have to be moved out."

But one 30-year-old self-described anarchist, refusing to give his name, was unapologetic as he helped dry off fellow protestors drenched by police water canons.

"With 200 people we have shown to millions of people that it's possible to bring people onto the streets and make clear that we are not going to simply accept everything decided by the people at the top," he told AFP.

"And we believe that we have brought across a pretty good message -- that it's possible to protest and that there is no need to be scared of the police," he said.