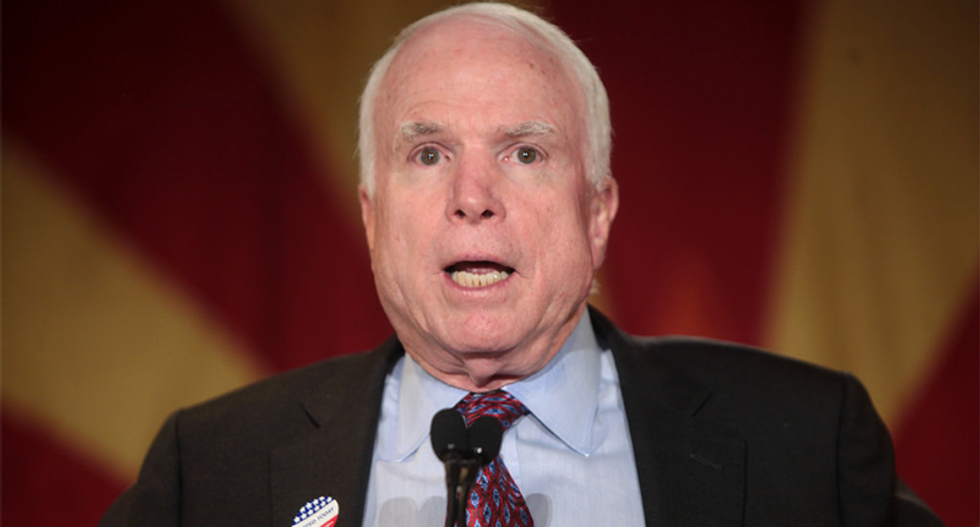 A spokeswoman for Sen. John McCain (R-AZ) on Friday issued a biting statement aimed at Sen. Chuck Grassley (R-IA), accusing his Republican colleague of “clearly” trying to “distract” from multiple investigations into Russian interference in the 2016 presidential election.

Grassley on Wednesday wrote to FBI Director Christopher Wray, demanding to know “If the FBI did provide a defensive briefing or similar warning to the [Trump] campaign” about Russian efforts to interfere in the election

“If the FBI did not alert the campaign, then that would raise serious questions about what factors contributed to its decision and why it appears to have been handled differently in a very similar circumstance involving a previous campaign,” Grassley wrote.

Included in his letter was a reference to McCain, whom Grassley argued was informed by the FBI about similar Russia-linked contacts during his 2008 presidential run.

“A recent report quoted an anonymous U.S. counterintelligence official who had been involved as saying: ‘Before there was Trump, there were concerns about some of the same people being around McCain about 10 years ago, and we alerted his team to those concerns and they appeared to take some defensive action,’ Grassley wrote. “Indeed, earlier, Senator McCain’s inner circle was reportedly cautioned by U.S. intelligence to distance itself from a Russian advisor who U.S. intelligence believed might have ties to the Russian military, and the McCain team subsequently asked the advisor to leave.”

In a statement, McCain spokeswoman Julie Tarallo disputed Grassley’s reference, arguing no one on the Arizona senator’s team "recalls receiving such warnings from the intelligence community."

“Facts are stubborn things, and the fact is no member of Congress has done more to push back on Russian aggression, human rights abuses, and corruption than Senator John McCain,” Tarallo said. “Any suggestion to the contrary is clearly intended to distract from the serious ongoing investigations into Russia’s interference in our election system.”

Tarallo also iterated McCain's support for Special Counsel Robert Mueller, who is heading the investigation into Russian inference in the 2016 presidential election and possible collusion with the Trump campaign. Mueller is also reportedly probing whether Trump committed obstruction of justice when he fired former FBI Director James Comey, as well as any possible financial crimes related to former Trump campaign chairman Paul Manafort.

“Senator McCain has high confidence in Special Counsel Mueller and our intelligence agencies, and trusts they will follow all of the facts surrounding Russia’s brazen attack on our election wherever they lead,” Tarallo said.