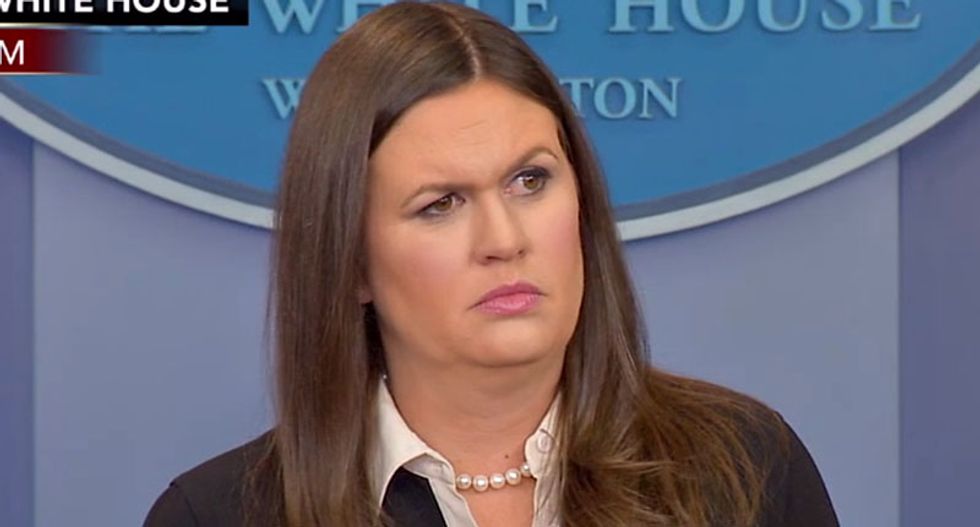 As anger swells over the federal government's failed disaster relief for Puerto Rico, White House press secretary Sarah Huckabee Sanders attempted to cast President Donald Trump as the hero who brought a happily-ever-after ending to the island that was devastated by Hurricane Maria.

Trump, "has your back" is "the real story some in the media refuse to tell," Sanders tweeted Saturday morning.

hurricane is to trash talk them and then go golfing," Anne tweeted in response.

The internet had different opinions about the "real story" in Puerto Rico.

"The real story is that people are needlessly dying due to the extremely slow response of the current administration to the crisis," Sheila Kremer fact-checked.

Here are some of the other responses to Sarah Huckabee Sanders trying to re-write the narrative of Puerto Rico:

@PressSec Trump: an icon of evil. Tweeting petty attacks from his golf club, while the Mayor of San Juan is busy sa… https://t.co/r6Hs5Z5Mnb
— ☇RiotWomenn☇ (@☇RiotWomenn☇)1506791361.0

@PressSec Please stop pitting state govt officials against one another. 45 should apologize to mayor and ask how he… https://t.co/U2yafPrOtM
— Kay Mathers (@Kay Mathers)1506791843.0

@PressSec @trumps_feed Maybe if you had a sterling reputation for telling something vaguely resembling the truth, t… https://t.co/4sQkEkemza
— Marc Livolsi (@Marc Livolsi)1506790223.0

@PressSec The real story: @POTUS won't do a damn thing unless his ass gets kissed. And even then, not for brown people.
— Laurie Sundstrom (@Laurie Sundstrom)1506793725.0

the real story is that, while trump is tweeting petty and cruel shit from his golf course, actual human beings are… https://t.co/JUpcl8gIaj
— Ashley Feinberg (@Ashley Feinberg)1506789911.0

@PressSec The real story is that the President is vile, racist garbage who makes EVERYTHING about him.
— WearAMaskUtah! (@WearAMaskUtah!)1506790109.0