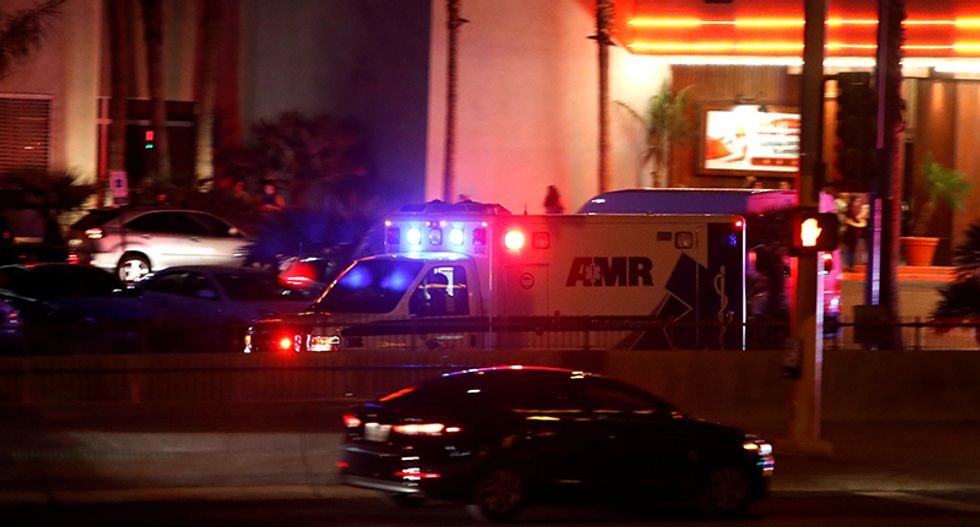 An ambulance heads to a hospital after a mass shooting at a music festival on the Las Vegas Strip in Las Vegas, Nevada, U.S. October 1, 2017. REUTERS/Las Vegas Sun/Steve Marcus

At least 50 people were killed and more than 400 injured when a gunman opened fire on a country music festival in Las Vegas Strip on Sunday, raining down bullets from the 32nd floor of a hotel for several minutes before shooting himself dead, according to police.

The death toll, which police emphasized was preliminary, would make the attack the deadliest mass shooting in U.S. history, eclipsing last year's massacre of 49 people at an Orlando night club.

Some 22,000 people were in the crowd when the man opened fire, sending panicked people fleeing the scene, in some cases trampling one another, as law enforcement officers scrambled to locate and kill the gunman. Shocked concert goers, some with blood on their clothes, wandered the streets after the attack.

At least 406 people were taken to area hospitals with injuries, the Las Vegas Metropolitan Police said.

Police identified the gunman as area resident Stephen Paddock, 64, and said they had no information yet about his motive. Paddock shot himself before police entered the hotel room he was firing from, Clark County Sheriff Joseph Lombardo told reporters.

Earlier reports indicated that Paddock, who had more than 10 rifles in his hotel room, had been shot by police.

Paddock was not believed to be connected to any militant group, Clark County Sheriff Joseph Lombardo told reporters.

"We have no idea what his belief system was," Lombardo said. "We've located numerous firearms within the room that he occupied."

Authorities had earlier regarded Paddock's roommate as a person of interest, but later on Monday said they no longer regarded her as related to the case, CNN and Fox News reported, citing police sources.

The dead included one off-duty police officer, Lombardo said. Two on-duty officers were injured, including one who was in stable condition after surgery and one who sustained minor injuries, Lombardo said. Police warned the death toll may rise.

Police are still finding people who had taken cover during the attack, Lombardo said.

"It's going to take time for us to get through the evacuation phase," Lombardo said.

"It sounded like fireworks. People were just dropping to the ground. It just kept going on," said Steve Smith, a 45-year-old visitor from Phoenix, Arizona, who had flown in for the concert. He said the gunfire went on for an extended period of time.

"Probably 100 shots at a time. It would sound like it was reloading and then it would go again," Smith said. "People were shot and trying to get out. A lot of people were shot."

Las Vegas's casinos, nightclubs and shopping draw some 3.5 million visitors from around the world each year and the area was packed with visitors when the shooting broke out shortly after 10 p.m. local time (0400 GMT).

Mike McGarry, a 53-year-old financial adviser from Philadelphia, was at the concert when he heard hundreds of shots ring out.

"It was crazy - I laid on top of the kids. They're 20. I'm 53. I lived a good life," McGarry said. The back of his shirt bore footmarks, after people ran over him in the panicked crowd.

The shooting broke out on the final night of the three-day Route 91 Harvest festival, a sold-out event attended by thousands and featuring top acts such as Eric Church, Sam Hunt and Jason Aldean.

"Tonight has been beyond horrific," Aldean said in a statement on Instagram. "It hurts my heart that this would happen to anyone who was just coming out to enjoy what should have been a fun night."

The suspected shooter's brother, Eric Paddock, said the family was stunned by the news.

"We have no idea. We're horrified. We're bewildered and our condolences go out to the victims," Eric Paddock said in a brief telephone interview, his voice trembling. "We have no idea in the world."

U.S. President Donald Trump offered his condolences to the victims via a post on Twitter early Monday.

"My warmest condolences and sympathies to the victims and families of the terrible Las Vegas shooting. God bless you!" Trump said.

The rampage was reminiscent of a mass shooting at a Paris rock concert in November 2015 that killed 89 people, part of a wave of coordinated attacks by Islamist militants that left 130 dead.

The concert venue was in an outdoor area known as Las Vegas Village, across the Strip from the Mandalay Bay and the Luxor hotels.

"Our thoughts & prayers are with the victims of last night's tragic events," the Mandalay Bay said on Twitter.