Sarah Sanders battles CNN's Jim Acosta: You have a 1st Amendment 'responsibility' to be 'positive' about Trump 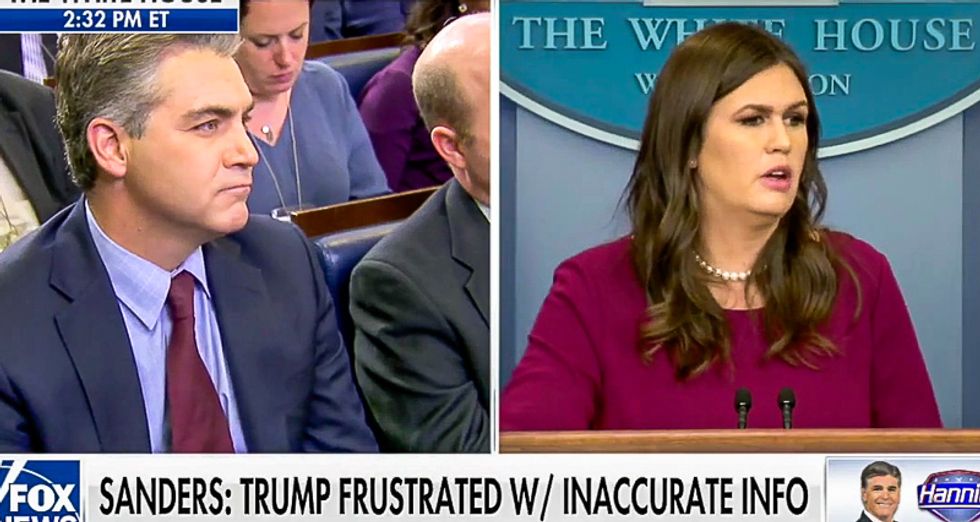 White House Press Secretary Sarah Huckabee Sanders warned media this week that they had a responsibility not to report "fake news" but she was not as ready to place restrictions on Second Amendment freedoms.

During her Thursday White House briefing, Sanders agreed with the National Rifle Association (NRA) that so-called bump stocks that simulate fully-automatic gunfire might need to be regulated. Sanders also pointed out, however, President Donald Trump was a big supporter of the Second Amendment.

CNN correspondent Jim Acosta noted that the president had called on the Senate to investigate so-called "fake news," a remark that was seemingly directed at mainstream outlets like CNN and NBC.

"Does he value the First Amendment as much as he values the Second Amendment?" Acosta wondered.

"I think, right now, when we've seen recent information that says that only 5 percent of media coverage has been positive about this president's administration, while at the same time, you have the stock market and economic confidence at an all-time high, ISIS is on the run, unemployment is at the lowest level it's been in 17 years, we've cut regulations at an historic pace, we're fixing the V.A. for our vets," she complained. "You've only found 5 percent of your time to focus on some of those issues. And frankly, those are the issues that most Americans care about, not a lot of the things that you cover. Not a lot of the petty palace intrigue you spend your time on."

"I think we need to move towards a more fair, more accurate and, frankly, more responsible news media for the American people," the press secretary insisted.

A Virginia man associated with the white supremacist Groypers movement who is accused of breaching House Speaker Nancy Pelosi’s conference room and assaulting law enforcement at the U.S. Capitol on Jan. 6 went on to work on Glenn Youngkin’s successful campaign for Virginia governor as an employee of the state Republican Party.

The government accuses Joseph Brody of Springfield, Va. and four other young, white men of entering the Capitol together and chanting, “Nancy, Nancy, Nancy,” before entering Speaker Pelosi’s office on Jan. 6. After leaving the building, the government alleges that Brody assisted another rioter in using a metal barricade to knock a Capitol police officer back to prevent him from securing the door. Later, the five men reportedly watched the destruction of media equipment, with charging documents indicating that Brody appeared to damage a corded phone while one of his codefendants looted a pair of headphones.