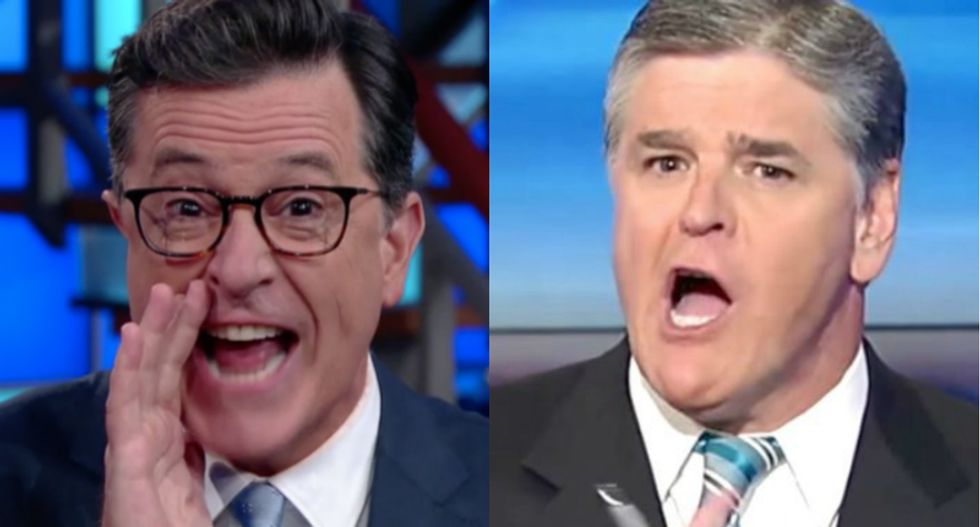 Fox News' host Sean Hannity's completely crazy flowchart outlining his conspiracy theory about Hillary Clinton made waves earlier this week -- and naturally, Stephen Colbert couldn't pass up the opportunity to make a Hannity chart of his own on Friday's episode of The Late Show.

"No matter how much Hillary Clinton deflects and ignores this issue, her private server will not go away," the "Hannity Made A Chart" segment, like the original it's mocking, begins.

"She broke the law, and this is about as big a conspiracy as Area 51," he said. "Let's go to Mars and talk about Martians who supported Hillary."

"See how this is all beginning to come together?" he asks in the pieced-together soundbites from past Hannity shows.

Connecting her to an "open manhole in New York City" and a "sewer rat prince" and the "crocodile duchess of garbage," the chart gets more and more bizarre -- much like the original.

"Here come the black helicopters," he says. "You know what that means? A vampire!"

Watch the outlandish use of the Fox News host's own words below.

Sean Hannity assembled an intricate chart of Hillary Clinton’s ties that proves, once and for all, that… something? pic.twitter.com/8jhHyzuz4Z