'Quite a roster': Maddow runs through the impressive list of known Russians who made contact with Trump's campaign 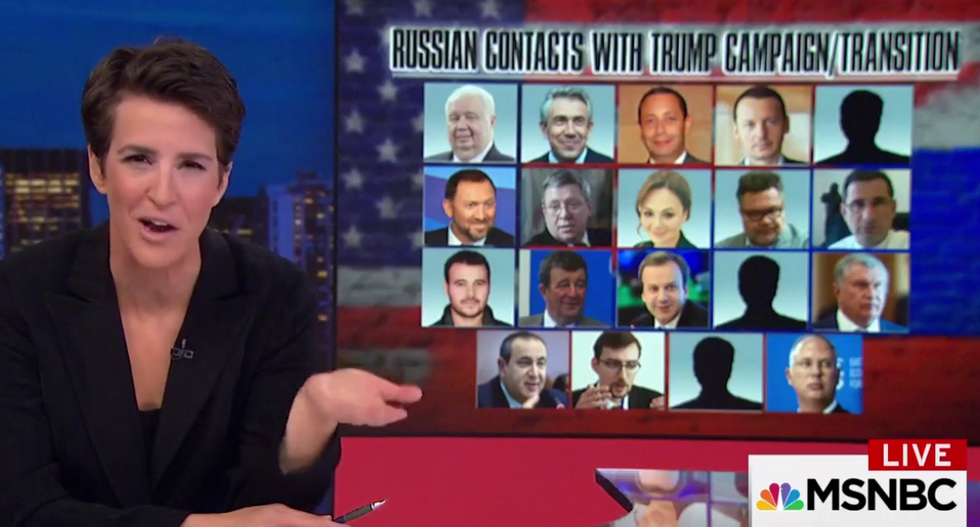 MSNBC’s Rachel Maddow on Wednesday ran through the exhaustive list of Russian and Russia-connected people who managed to make contact with Trump’s team during the 2016 presidential campaign and transition.

“Last night on this show we went through the list of all the Russians and Russia-connected people we now know were in contact with Trump campaign and transition,” Maddow said. “We came up with 19 different Russians.”

“Turns out forgot to include on the pictorial tableau of Russians a guy named Ike Kaveladze, he’s the Russia money-laundering suspect, the eighth man at infamous Trump Tower meeting last summer, which involved Jared Kushner and Paul Manafort and Donald Jr.,” Mueller explained.

“He goes on our chart there next to the Russian lawyer and the Russian lobbyist,” Maddow added. “He, too, was at that Trump Tower meeting. So that's my correction.”

“It’s quite a roster,” the host said. “Ad there could, of course, be more. More than a year after the election, more like a year-and-a-half since the FBI started their counterintelligence investigation into links between Russia and the Trump campaign, we are still adding to the list of Russian figures who successfully made contact and got themselves involved, at one level or another, with the Trump campaign and Trump transition.”