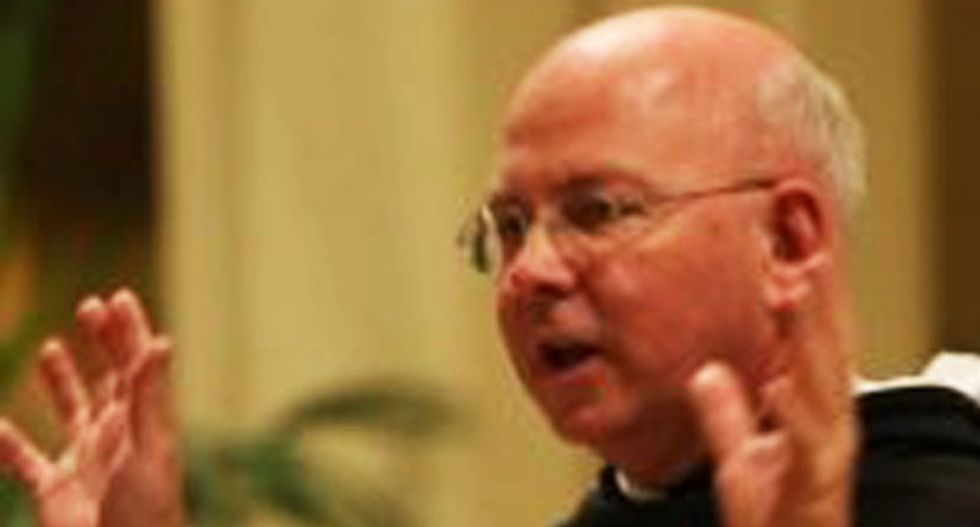 During a call-in show at Catholic Answers, an ordained priest advised a concerned handyman that it was okay to not install fire alarms at a local Planned Parenthood because it would be no different than assisting Nazis or the Ku Klux Klan.

In audio flagged at the Friendly Atheist, Father Paul Keller told an unidentified man calling from Nebraska that it would be unethical to do work for the health centers.

"It would be not a good thing to be involved in helping somebody who’s taking a life," Keller patiently explained. "Think about if you were in Nazi Germany, and you were asked by Hitler to install a fire alarm, or a sprinkler system, in one of the guards’ shacks right next to the ovens that were killing Christians and Jews, and so forth. I don’t think you’d want to even set foot in an internment camp such in that part of the world."

"Or the Ku Klux Klan," he continued. "Suppose the Ku Klux Klan asked you to do this similar work in one of their offices, but they are completed devoted to being anti-Catholic and… being totally racist and so forth. So no, you wouldn’t want to do that."

Keller then dove into his rationale for putting patients and the health center employees at risk by suggesting Planned Parenthood staffers are the same as Nazis or Klan members -- only worse.

"Because that is Planned Parenthood, because their business is to kill babies in the womb, and we should have nothing to do with it. We should not aid and abet them in any way whatsoever," Keller lectured before concluding, "So, yes, it would be unethical to work with them, for them, in any way."

You can listen to the audio below, Planned Parenthood discussion happens at the 36 minute mark: