'We might have to get taller cameras': CNN cracks up as White House tries to block them from filming Trump golfing 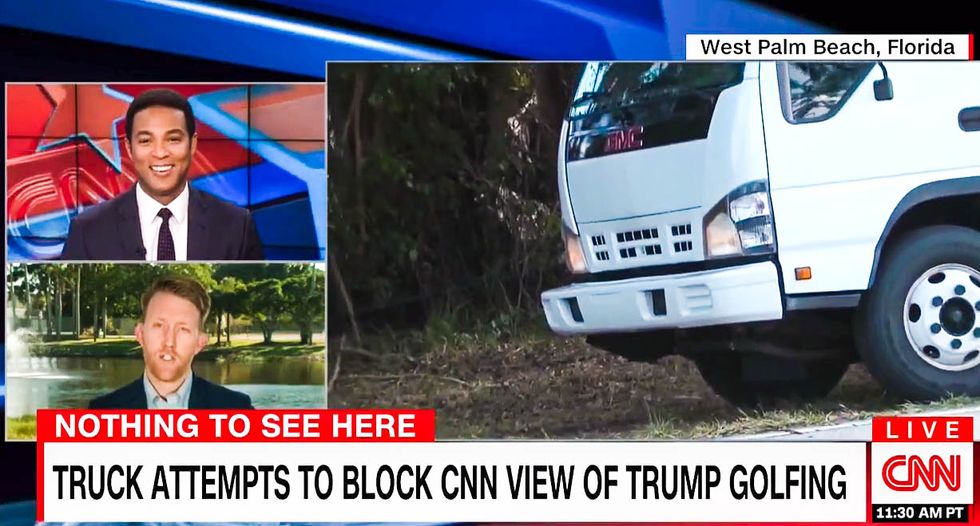 CNN on Tuesday caught footage of President Donald Trump playing golf, despite the fact that Trump on Monday had insisted he would be getting "back to work" on the day after Christmas.

Trump was back on the golf course again on Wednesday, and CNN once again stationed itself just outside the course on public property in an attempt to capture footage of the president golfing.

This time, however, someone had parked a massive white truck in front of the clearing the CNN used earlier this week to get Trump golfing footage -- thus blocking the cable news network from getting any new video.

During an interview with Don Lemon, CNN's Dan Merica explained how it seemed that someone in the White House had ordered the truck to be parked in that location to obscure CNN cameras' views of Trump playing golf.

"This may seem trivial, but it is important to get video of the president as he does these things on a daily basis," Merica said. "The president and the White House have tried to obscure the fact that President Trump golfs on a regular basis."

Lemon pointed out that CNN in the past had regularly gotten video footage of former President Barack Obama golfing -- and then noted that Trump regularly ripped Obama for his golfing habits during the 2016 presidential campaign.

"It's called hypocrisy," Lemon said, before adding that CNN "may have to get taller cameras" to catch Trump golfing in the future.