'Cut it out!': Interview goes off the rails after Kellyanne Conway accuses CNN's Cuomo of not caring about border security 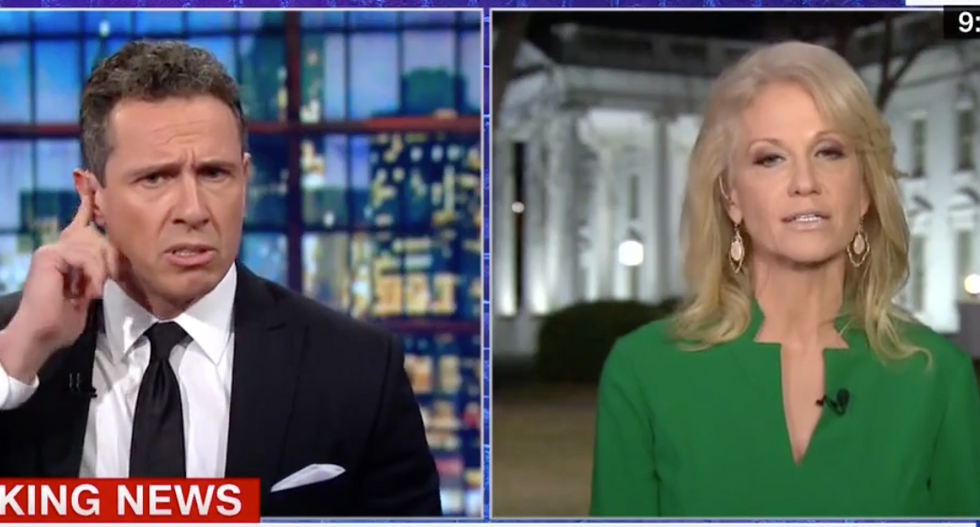 An interview between CNN’s Chris Cuomo and counselor to the president Kellyanne Conway derailed on Monday as the pair clashed on immigration and the government shutdown.

In a rowdy back and forth, Cuomo challenged Conway on the administration’s hardline approach to immigration, at one point asking, “why are you treating immigrants like they're monsters?”

“Don’t even go there,” Conway replied.

“I'm all over it,” Cuomo retorted. “I bought property in this place.”

Conway later accused CNN of being upset that the government shutdown was solved because “we’ve traded in the Russia graphics for the shutdown graphics.”

In a tussle over the president’s changing position regarding a border wall, Cuomo accused Conway of talking “like [Trump] never looked at a map before.”

Conway said Cuomo was “disparaging to the office of the president”—prompting the CNN host to call that an “unfair shot.”

But it was when Conway tried to accuse Cuomo of not caring about the resources afforded to border patrol agents that the interview truly veered off course.

Conway said just because Cuomo took one trip to the border in his khakis doesn’t mean he knows about immigration.

“Cut it out!” Conway shouted back.