Fox host enrages CIA chief: What would CIA say about a world leader who calls himself 'stable genius'? 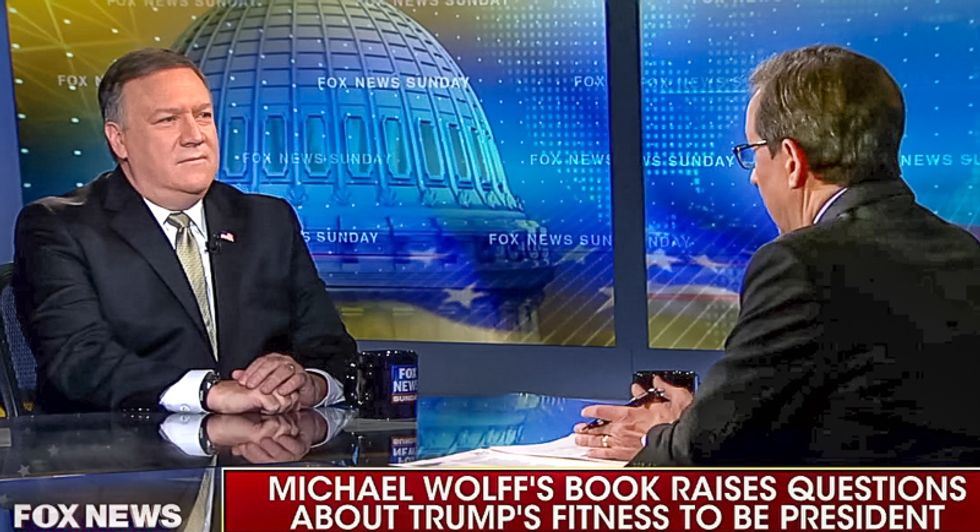 CIA Director Mike Pompeo on Sunday told Fox News that he would not "dignify" any question about President Donald Trump's mental health.

In an interview on Fox News Sunday, Wallace noted that Michael Wolff's new book, Fire and Fury: Inside Trump's White House, had raised questions about the president's fitness for office.

Pointing to a tweet in which Trump called himself a "stable genius," Wallace wondered how the CIA would assess other world leaders who did the same thing.

"The CIA does psychological profiles of world leaders," Wallace observed. "What would you say about a world leader who refers to himself as a 'very stable genius'?"

Pompeo, however, refused to answer the question.

"I'm not going to dignify that question with a response," the CIA director insisted. "This is a man who is leading the United States of America and who engages with the intelligence community in ways that are sophisticated. He deals with the most complex issues and has handled them in a way that I great admiration and respect for. We're keeping America safe."

"You say you're keeping America safe," Wallace pressed. "By raising questions about the president fitness, in a sense -- and the president became a part of it, making this the big topic this week -- has this book weakened our country, weakened our standing around the world?"

"No," Pompeo replied without offering an explanation.