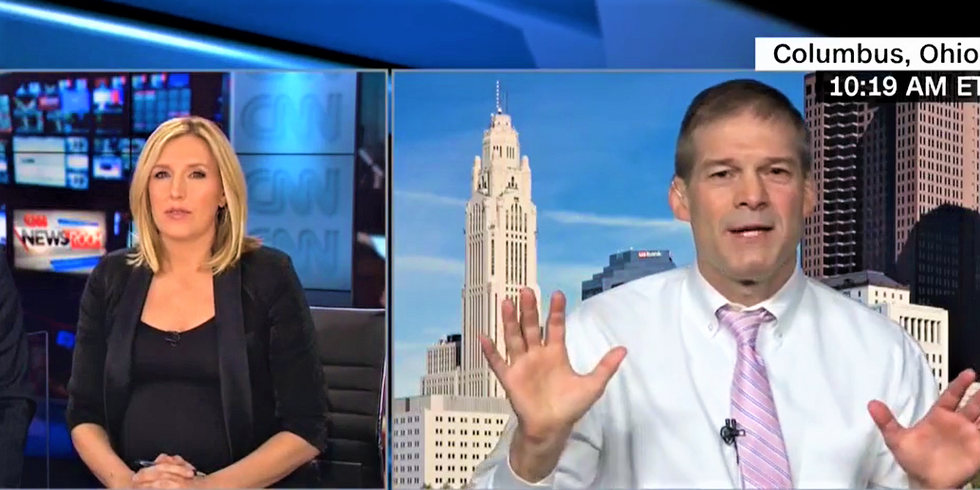 Rep. Jim Jordan (R-OH) went on CNN Wednesday to talk about the Russia investigation -- but he flailed wildly when asked about Donald Trump Jr.'s 2016 meeting with Russian officials to get dirt on Hillary Clinton.

When asked point-blank by CNN's John Berman if he agreed with former Trump political strategist Steve Bannon that Trump Jr.'s meeting with the Russians in Trump Tower was "treasonous," Jordan refused to answer the question and tried to turn it around to implicate the FBI and Washington-based research firm Fusion GPS.

"Well, I think he's been questioned about that meeting," Jordan said of Trump Jr. "What i want to know about that meeting is, why was the Russian lawyer meeting with Glenn Simpson, the Fusion GPS founder, both before and after the meeting Donald Trump Jr. had with the Russian lawyer? Why did that take place? I think there's lots of questions that need to be answered."

CNN's Poppy Harlow was not satisfied by this answer and again asked Jordan if he agreed with Bannon's statement that the Trump Jr. meeting was "treasonous."

"I just asked you a different question!" interrupted Harlow. "That's not what we're asking you."

"It sounds like you don't think it needs to be answered, about whether or not this meeting was treasonous or unpatriotic," Harlow shot back. "Is that right?"