Conway unwittingly makes point about White House: 'Why would someone like me and other women work there?' 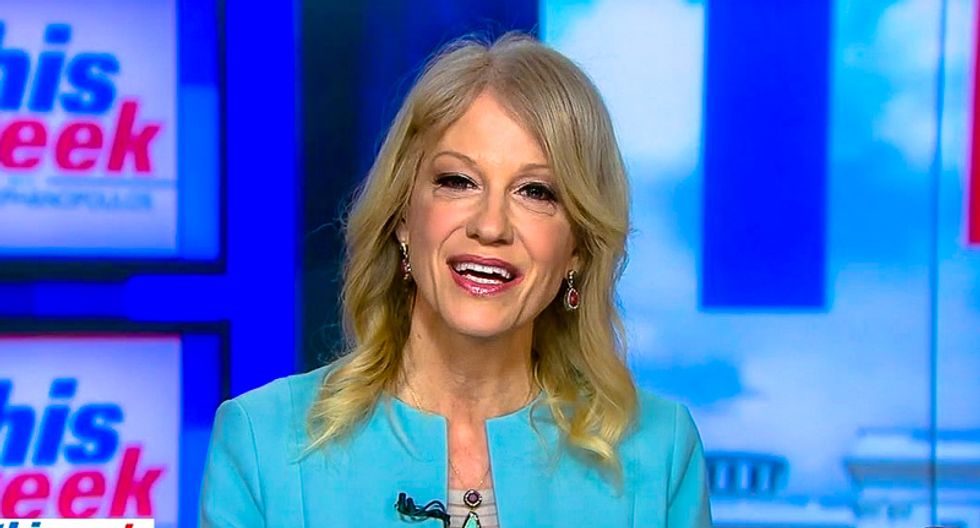 White House counselor Kellyanne Conway on Sunday suggested that women would not work at the White House if they were not respected and valued as equals.

ABC host George Stephanopoulos noted during an interview with Conway on This Week that there is "pattern" with President Donald Trump's view of women.

"When a friend or an ally -- a man -- gets in trouble with these allegations of abuse or sexual harassment, the president's sympathies immediately go to the man," Stephanopoulos said. "Whether it's Bill O'Reilly or Roger Ailes or [former White House staffer and alleged wife beater] Rob Porter."

"Why is that?" the host wondered. "And do you understand the problem that creates for the president?"

Conway insisted that Trump "is a man who shows great compassion and understanding for women on many different issues."

"I, frankly, wouldn't work there if that were not the case," she added. "I could be dozens of other places for lots of money. Why would someone like me and many other women be there?"

"He is an excellent boss to work for, an excellent boss for women, for working mothers, frankly," Conway continued. "And I believe he's there, I know that he's there as president of the United States because he wants to do well across all Americans."

Conway also said that Trump had "come to the aid of many women privately."