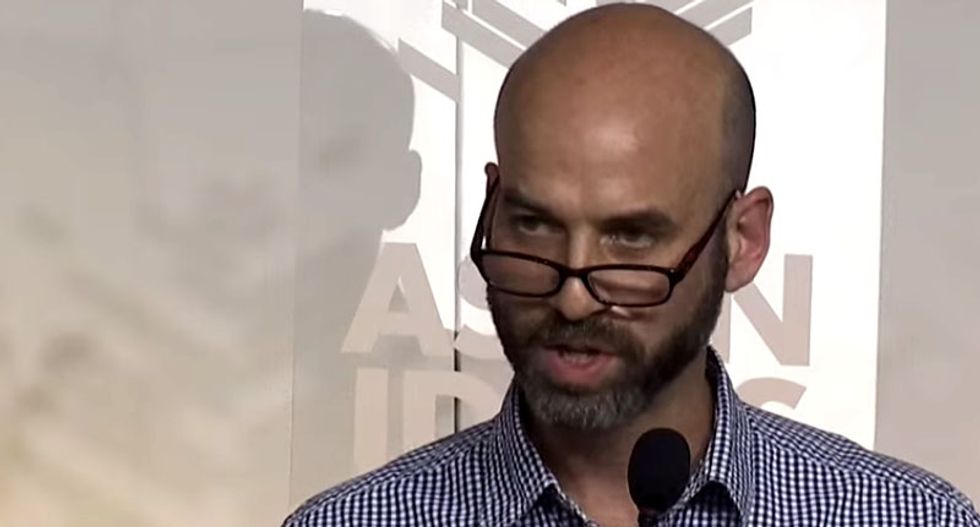 Since Donald Trump was elected president, the New York Times' editorial page has waged a frontal assault on its readers' intelligence. Just this month, it has published pieces defending Woody Allen and Aziz Ansari against allegations of sexual abuse, and another scolding liberals for not being sufficiently respectful of gun owners in the wake of the latest mass shooting. In between, the paper hired and fired its leading commentator on technology after learning she counts a prominent neo-Nazi among her close friends.

Subscribers are taking notice, and they're not alone. According to a Vanity Fair report, Times reporters have grown increasingly frustrated with the paper's op-ed section and fear it may be undermining their work. As one anonymous senior staffer put it, “Until yesterday, people felt like [Opinion] was a shakeup. Now people are worried. The newsroom feels embarrassed.”

At the center of the controversy is editorial-page editor James Bennet, who earlier this month sent a 1,500-word memo to staff outlining how he interprets former Times publisher Adolph Ochs' original mission for the section. The memo was a response to an earlier HuffPost story containing internal chat transcripts of Times employees expressing their disgust with the op-ed section, specifically the contributions of recent addition Bari Weiss.

"We’re not just letting a thousand flowers bloom," Bennet writes. "We are picking our contributors with care, looking for people who share Times standards for fairness and intellectual honesty and originality, who believe in empiricism and the essential equality of all human beings. We are, as ever, editing and fact-checking our work."

Discerning readers might disagree. Over the past year, the Times has not only published a Bret Stephens column questioning widely established climate science but found itself the subject of a defamation suit from Sarah Palin after suggesting that inflammatory remarks made by the former Alaska governor helped incite the shooting that nearly killed Arizona Rep. Gabrielle Giffords. (The lawsuit was ultimately dismissed after a judge determined the Times had not acted with malice.) Several weeks ago, the paper ran a column titled "Background Checks Are Not the Answer" from John Lott, a gun rights advocate whose research has been repeatedly debunked. Days after its publication, a 19-year-old gunman opened fire on Marjory Stoneman Douglas High School in Parkland, Florida, killing 17.

None of this has been lost on Times staffers, who recorded a recent meeting with Bennet and leaked it, again, to the HuffPost. What emerges from this latest report is an editorial page rife with internal contradictions, "a case study in how essentially liberal institutions are undermined by the tools of their own liberalism." Bennet professes that the section is humanist and universal, yet recognizes select forms of ethnic cleansing as worthy of consideration; he "proudly forswears the idea of right answers," but insists capitalism is the "greatest anti-poverty program and engine of progress the world has ever seen"; he claims climate science is "settled," but is nonetheless willing to indulge Bret Stephens' skepticism. Meanwhile, Bennet deems Richard Spencer unworthy of publication not because he's a white nationalist but because he represents a fringe movement.

The Times is not the only major newspaper whose opinion columnists and reporters are openly warring with each other. Last October, members of the Wall Street Journal newsroom anonymously voiced contempt for their paper's feverish defenses of Trump's presidency amidst a rash of indictments in the Mueller investigation. “We could disprove half the stuff [the opinion writers] are saying if they just read our own reporting," one WSJ reporter said at the time. "It’s like living in some alternate universe."

What makes James Bennet's editorial page so egregious is that unlike the Journal, the Times is considered the country's paper of record. Not only has the op-ed section failed to live up to its own lofty standards, it can't even lay claim to the intellectual contrarianism it champions in defense of its most incendiary content.

“If your goal were to wage war on media diversity in all of its forms, and to offer the narrowest range of views possible, it would be hard to top the roster of columnists the paper has assembled," the Intercept's Glenn Greenwald wrote in August. "Beyond the obvious demographic homogeneity, literally every one of them fits squarely within the narrow, establishment, center-right to center-left range of opinion that prevails in elite opinion-making circles...None is associated with or supportive of the growing populist left or the populist right; they all wallow in the vague, safe, Washington-approved middle ground, members in good standing of the newly overt neoliberal-neoconservative alliance.”

While Bennet has acknowledged the page remains a work in progress, neither he nor newly appointed publisher Arthur Sulzberger III seems especially interested in changing course. “There’s no question that social media amplifies the freak-outs,” Bennet tells Vanity Fair. “Right now, it’s really hard to separate the signal from the noise.”

Meanwhile, Sulzberger offers this chestnut: “We publish dozens and dozens of op-eds a week. Look at them as a whole and you’ll see the breadth of voices there. Sure, Erik Prince wrote in our pages. You know who else has written in our pages? Bernie Sanders, and not just once."

If the Times views a war profiteer and a democratic socialist as equal and opposite viewpoints worthy of publication, if it's truly willing to embrace this brand of surreptitious illiberalism, perhaps Bennet's editorial page is beyond saving.