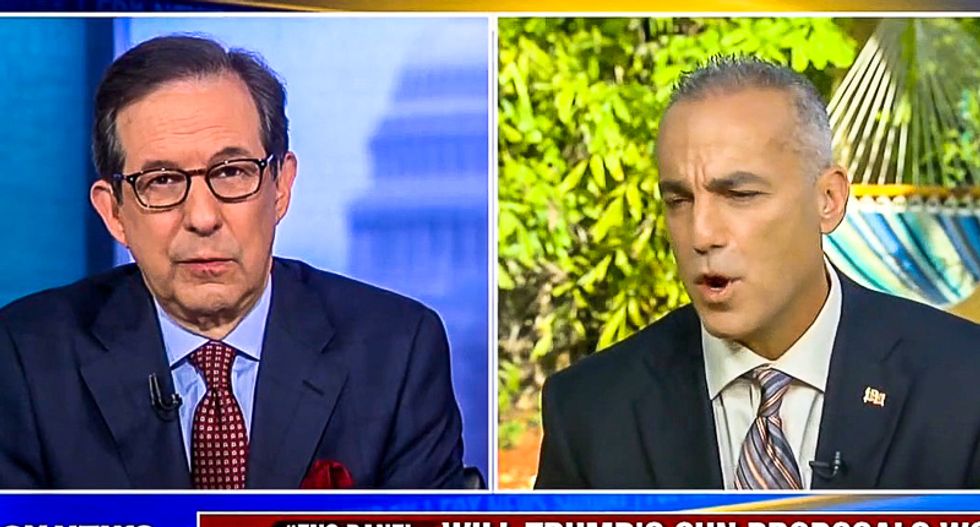 A father from Parkland, Florida slammed Fox News host Chris Wallace on Sunday for pressing Florida Gov. Rick Scott (R) on gun control instead of focusing on increasing security -- and the number of guns -- at schools.

Andrew Pollack, who is a supporter of President Donald Trump, told Wallace in an interview on Sunday that he was guilty of "polarizing" the mass shooting at Marjory Stoneman Douglas High School because he asked Scott about banning military-style assault weapons like the AR-15.

"I just heard what you said, what you're focusing on, polarizing this event, the murder of these kids, you're talking about gun control," Pollack griped. "I just had to listen to you and Gov. Scott talk about gun control. Gun control is a big issue. No one in America is going to come together on control, Chris."

"You didn't say one thing about fixing it"! the father exclaimed. "We can get together on school safety. But when you polarize it, this event and every other media -- we don't care about gun control right now. That's a big issue in the country and you're not going to get everyone together on it."

According to Pollack, Wallace should have spent his time talking about "security for our children."

The Fox News host wondered if Pollack agreed that people with mental health issues should not have access to guns.

"Is that a big issue when we were protecting airports?" Pollack replied, returning to the subject of fortifying schools. "I'm not saying it's not an issue. But when we were protecting our federal buildings, is that a big issue? We have our children in these classes. That's an issue and it could be worked out. But right now, the country just wants to come together and make our schools safe."

Wallace reminded Pollack that three armed deputies who were on the scene at Douglas High School reportedly waited outside the building while the shooter was killing students.

"I'm not trying to think about that stuff because that's just negative," Pollack insisted. "And it's just going to make me toxic so I just want to get the word out to the governors of every state that they have to do something now, today. Get together, they could call me, I have other dead parents here [SIC], we all want to help them. And let's make the schools safe."