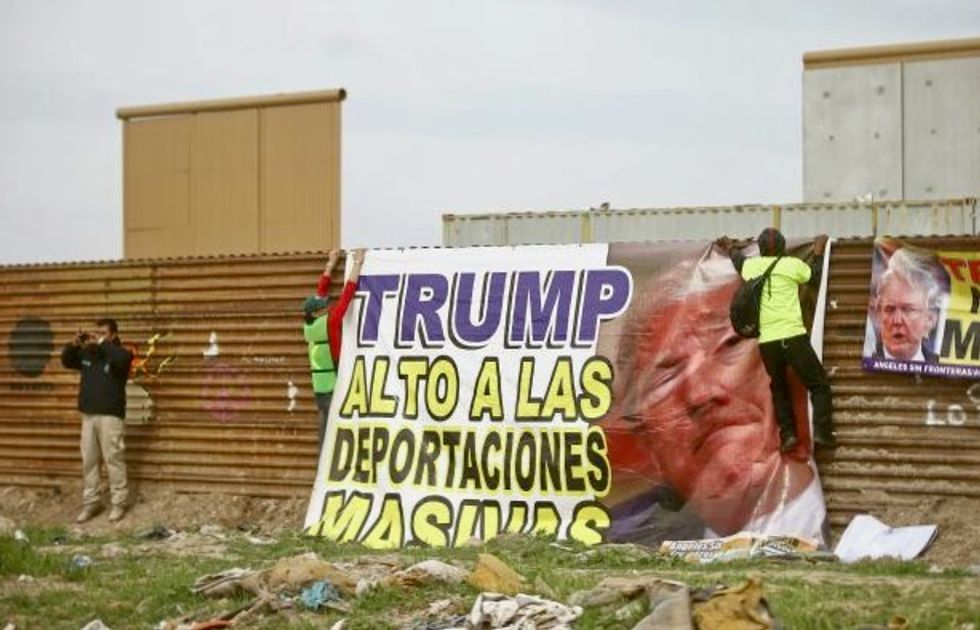 People attach a sign reading "Trump, stop the mass deportations" to the current border fence and near the prototypes of U.S. President Donald Trump's border wall, during a protest in Tijuana, Mexico March 13, 2018. REUTERS/Edgard Garrido

Mexican residents of a poor Tijuana slum in the shadow of eight prototypes of U.S. President Donald Trump’s planned border wall called the project a waste of money and laughed at the idea the monolithic slabs will stop desperate immigrants.

Several locals called Trump“loco” for thinking that spending billions of dollars on barriers would stop people determined to escape poverty and violence in Mexico and Central America. Trump made his first visit to California as president on Tuesday. His stop in San Diego to visit the prototypes was greeted by demonstrators on both sides of the border.

In the scrappy Rancho Escondido neighborhood on the Mexican side, protesters shouted over the line“we won’t pay for your wall,” in reference to Trump’s insistence that the structure should be financed by Mexico.

U.S. soldiers, some with binoculars, focused back across the border, standing atop trailers placed ahead of the visit that blocked the view of Trump from the south for both protesters and local residents.

“The size of these walls is not going to matter,” said Rogelio Perez, 48, who lives in the trash-strewn sprawl of cinderblock homes and makeshift huts grouped around a lot for abandoned cars, in sight of the 30-foot (9 meter)-high concrete and steel models.

“I even think they’ll try to cross with those pole vaults that they use in the Olympics,” he said as he awaited Trump’s visit.

The prototypes, designed by six U.S.-based companies and unveiled last October, stand a few feet apart on the eastern edge of San Diego, several hundred feet from the rusty, stunted existing fence, part of a patchwork barrier that winds along the 1,954-mile frontier between the United States and Mexico.

Trump has sought $18 billion in funding to build the wall over the next two years. Magda Palacios, 56, joked that investing that money south of the border would be more effective at stopping the flow of people into the United States.

“It would be better, instead of putting up fences, to send us the checks,” she said, flinging scrap metal into buckets in the yard of a house she made from salvaged junk.

Beyond the jokes, there was an undertone of sadness and anger among some locals, who said Central American and Mexican immigrants offered more to the United States than they take. They expressed dismay that Trump viewed them as a danger.

“I don’t understand how in this day and age they are doing this,” said Perez.“The Berlin Wall came down, and here it seems that they are building it again.”

Others in the neighborhood, a popular crossing point for border jumpers, examined the prototypes for weaknesses in designs that include an underground foundation to make tunneling harder.

One eight-year old girl pointed without hesitation to a steel-like structure capped in a narrow brown cylinder, saying Trump should pick that model, because it would be the least likely to stop an immigrant.

“The coffee-colored one,” she said.“It’s the easiest to throw an anchor up and pull yourself over.”

Her mother, Salome Pacheco, said migrants would find ways to tunnel through, or resort to sea crossings to get into the United States.

“The wall is just a waste of money. People will continue to cross, here, there, and everywhere.”

The potential for violent extremism in America to erupt into full-fledged conflict across the country is a common topic of discussion nowadays.

A recent FBI report highlights an increasing risk of violence against government institutions, private organizations and individuals. The possible perpetrators: primarily “lone wolves,” but potentially also militias and other organized groups such as animal activists, anti-abortionists and white supremacists.

A gay rights activist who played a large role in legalizing same sex marriages in Florida has been found dead in a landfill, NBC News reports.

The death of Jorge Diaz-Johnston, 54, is being investigated as a homicide. Investigators say he was last seen alive on Jan. 3. He was found in a pile of trash at a landfill in Baker, Florida. Former Miami Mayor Manny Diaz, who is his brother, gave a statement confirming his brother's death.

Will false Trump electors' attempt to hijack the Wisconsin vote be punished?

The 10 Wisconsin Republicans who assembled on Dec. 14, 2020 at noon in the state Capitol and falsely certified that Donald Trump had won the state’s electoral votes were not the nation’s only bogus electors. They made up just one of seven groups falsely claiming Trump was the victor in states where the majority of voters chose Joe Biden for president and Kamala Harris for vice president.