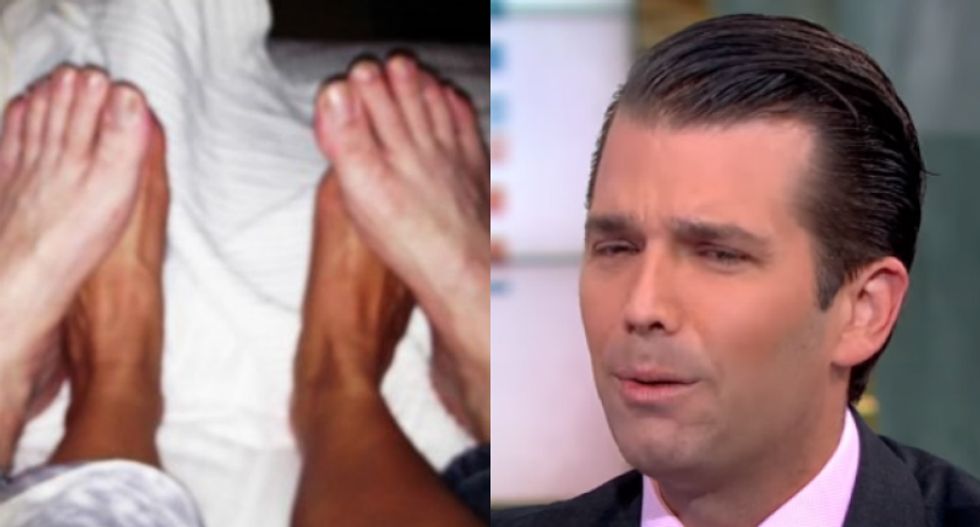 Gossip sites and social media users have devised a new conspiracy theory claiming a photo of two pairs of feet posted in 2012 proves Donald Trump Jr. had an extramarital affair years prior to his recently-announced divorce.

Business Insider reported Wednesday that the photo, posted in 2012 by pop singer and alleged Trump Jr. mistress Aubrey O'Day, has emboldened rumors that the president's eldest son followed in his father's footsteps and had an affair while his wife was pregnant in 2011.

Following the resurfaced photo, the Daily Mail reported that the larger feet in the photo are "remarkably similar in appearance to those of Donald Trump Jr." The Daily Mail and Business Insider proceeded to unearth photos that show Trump Jr.'s feet to judge the similarities.

@matthewjpasa and I had an awesome time and very cool opportunity to teach @donaldjtrumpjr how to Freedive! He was very comfortable in the water and a quick learner always nice to get the students who are a joy to teach! #floridafreedivers #FLFsuit #FLFwetsuit #bestCustomersinTheWorld #freediving #trump #trumpJr #friendsThroughFreediving

Though the foot photo evidence is circumstantial at best, Trump Jr.'s alleged affair with O'Day and her breakup song titled "DJT," along with the timing of their reported affair and the post's time stamp, lend the theory credence.

Earlier on Wednesday, TMZ acquired a previously-unreleased video of O'Day doing a cover of Gotye's "Somebody that I Used to Know," which they claim was aimed at Trump Jr.