Don Lemon shuts down ex-Trump aide live on air: 'It is a privilege to come on here -- it is not a right' 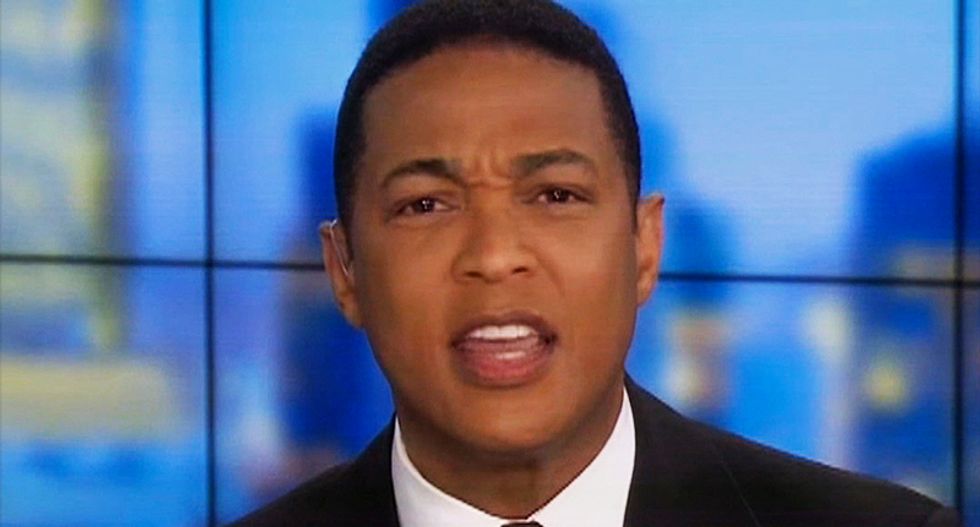 In a Thursday panel discussion about the Fox News spin protecting President Donald Trump, CNN host Don Lemon called out Sean Hannity for coordinating with Trump in a "feedback loop."

Media commentator Brian Stelter said that it is very clear that Hannity is coordinating with the White House since they're all using the same phrasing. He noted Hannity and Trump speak frequently and Hannity has been known to dine at the White House and join the president at Mar-a-Lago.

"The president props up an alternative reality where he's winning, his enemies are losing, where Mueller's corrupt, and where this investigation needs to be disbanded," Stelter said. "That's the alternative universe, that parts of Fox, the National Enquirer, which has been in the news, Sinclair commentators, right-wing media outlets prop up this alternative universe. And, look, that's fine in some ways. I love reading fiction novels. What they are promoting is a version of fiction and it does a disservice to their viewers to claim that it is facts."

Lemon asked Trump's former communications director Jason Miller whether it was "appropriate" to allow a cable news show to bash the special counsel. Miller pivoted to say that Hannity and Trump can do whatever they want because it is their Constitutional right to do so. Lemon corrected him asking if it was "appropriate." Miller ultimately refused to answer the question.

"You didn't answer my question," Lemon said. For that he decided to move on to former campaign staffer to Sen. Ted Cruz (R-TX), Amanda Carpenter. "Amanda, Mueller is a war hero, how can Newt Gingrich compare him to Stalin?"

"At once I thought Newt Gingrich to be a student of history, but these seem like pretty reckless comparison comparisons," Carpenter said. "I mean, here's my question, OK: the Trump people, they don't like [Jeff] Sessions, they don't like Mueller, they don't like [Rod] Rosenstein, so who do they like? They apparently like lawyers like Joe diGenova. What also makes reckless statements and I believe compared the Mueller probe to a form of regicide which is, by definition, the killing of a king. So, you can see where their head is at. And so they're on this campaign to discredit pretty much anyone who doesn't consider Donald Trump a king because I don't know where else this goes."

The second half of the discussion got even more heated as Lemon went up against Miller, who parroted the Trump talking points about "witch hunts" and the investigation taking too long.

"You're proving my point," Lemon said. "That's what they're being fed from Fox and from the White House."

In a shouting match, Lemon noted that the Benghazi investigation went on for two and a half years with seven different hearings by Republicans, where the Mueller investigation has been going on for less than a year.

"I did not hear one conservative saying, 'It is time to bring this to an end, it's going on too long,'" Lemon said.

Miller explained that the reason it was happening now is that Trump is winning so much. The discussion devolved into chaos from there until Lemon simply had to shut it down.

Responding to a question from Rep. Jamie Raskin (R-MD) about his use of the term "terrorists" to describe the followers of former president Donald Trump who stormed the Capitol on Jan 6th, Capitol policeman Daniel Hodges read the definition of "terrorism" into the record to the applause of viewers watching the House hearing.

Hodges, who was filmed during the riot being crushed between doors as he defended lawmakers on that day, told the Democratic lawmaker, "I can see why someone would take issue with the title of terrorist, it's gained a lot of notoriety in our vocabulary in the past few decades ... But I came prepared."