Meghan McCain berates James Comey to his face for not being more like J. Edgar Hoover 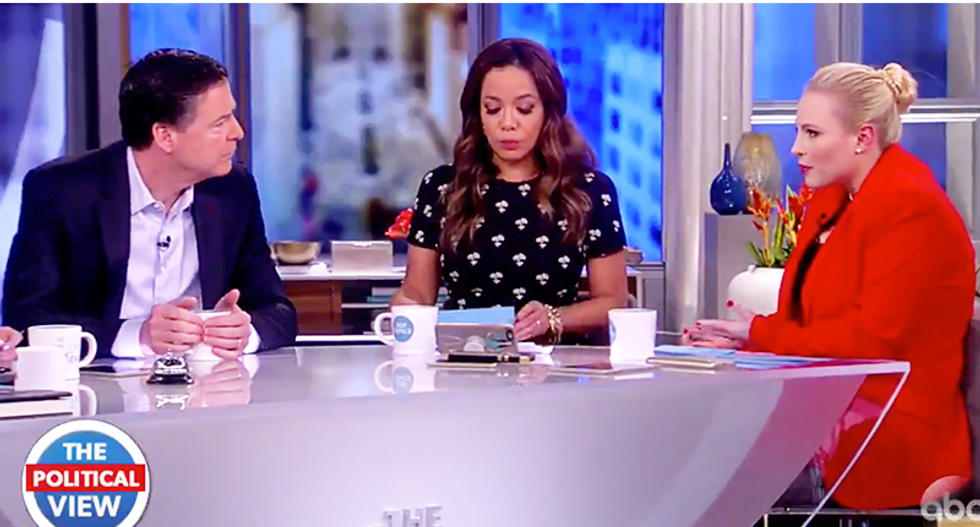 Former FBI Director J. Edgar Hoover might have been closeted, racist and headed a bureau that threatened civil rights activists, including Dr. Martin Luther King, Jr. However, on Wednesday's episode of "The View," co-host Meghan McCain told James Comey to his face that he should be more like Hoover.

Comey began his interview with the women by saying that his wife always says that when something happens people should try and make something good come from it. That was a major reason why he wanted to write the book.

"I think I had something useful to say," he continued.

McCain began her questioning by quoting former senior White House advisor David Axelrod saying, "I have no doubt about its brilliance when it comes to book sales. Maybe he should have called it 'Higher Royalties,'" referencing the book title Higher Loyalty.

Comey said that Axelrod and McCain should read the whole book before criticizing, because, "even if you leave the book still thinking I'm an idiot, you realize I'm actually kind of an honest idiot and I'm not on anybody's side."

McCain said that people at his level don't get there by being an idiot and she'd never accuse him of that. However, "maybe J. Edgar Hoover is rolling over in his grave at the things you're revealing. It doesn't seem like something the director of the FBI — why are you laughing?"

McCain asked the question because both Whoopi Goldberg and Joy Behar were cracking up.

"He is the wrong guy to bring up," Goldberg said.

"He didn't write a tell-all book when he left!" McCain said, perhaps not recalling that Hoover died while he was still the director of the FBI and before the director position had term limits.

"Did he say he was a cross dresser?" Behar joked.

"Can I finish my question?" McCain snapped. "What would you say to that?"

"That I don't think of it as a tell-all," he said. "It's a whole lot more than the stories that are in the last few chapters of the book. It's about mistakes I have made, things I'm very much ashamed of, I did when I was younger. It's a story about portions of my life to try to tell a story. It has no classified information or sensitive information, and I know that because I wrote it and the FBI reviewed it."

During the interview, it was announced that Congressional Republican issued a letter to Jeff Sessions, demanding that the Justice Department investigate Comey and others for a slew of what they say are crimes.

"It seems they've been saying that since the Clinton investigation and the inspector general is already looking into that," he said responding to the breaking news.

He noted that Hoover would probably have said about his term as FBI director that he followed the rules and was transparent.

"I mean, he had a number of flaws, one was that it was all about secret files and I'm trying to tell a story that some don't reflect well on me that's open and honest," he said.

McCain was also bothered by Comey's commentary about the Republican Party, saying multiple times that his comments were political. Comey retorted saying that he has values that the GOP no longer holds and that for some it might sound like politics but to him they are his values.

"I feel like the Republican Party left me and people like me," he said. "I used to think that at the heart of being a conservative, lower case, 'c,' was first that character matters and that values matter most of all, and I don't know where that is today in the Republican Party, so I'm just not comfortable being part of it."

McCain said that the commentary about the GOP does not represent people like her or others in her party who remain non-tea party members. However, as many commentators, including Republicans, have said, the GOP has been overtaken by the far right. Indeed, the party is headed by Donald Trump now, whether McCain likes it or not.

Comey also said that given the way the media has seized on the comments he's made about Trump's orange complexion and his hand size, he wished he didn't include it and he would have taken it out.

"It gave people a hand hold who haven't read the book to attack the book," he said.