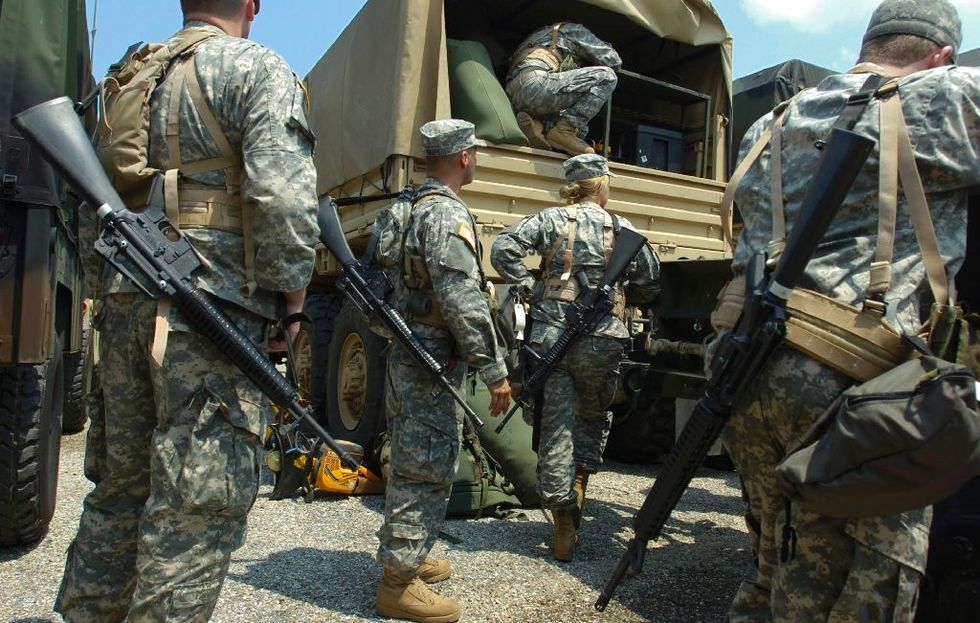 The Louisiana National Guard has been helping in the rescue and evacuation of more than 7,000 residents in the flood-devastated state (AFP Photo/Stephen Morton)

President Donald Trump’s strategy for the U.S.-Mexico border includes mobilizing the National Guard, the White House said on Tuesday, after Trump had earlier spoken publicly to reporters about “guarding our border with the military” to stop illegal immigrants.

The White House statement was released after Trump met with Defense Secretary James Mattis, Attorney General Jeff Sessions and other officials on border issues. It gave no details on whether or when Trump’s strategy might be implemented.

The National Guard, part of the U.S. military’s reserve forces, has been used in recent years for surveillance and intelligence on the border, but not direct law enforcement.

The president’s earlier remarks sharpened his recurring anti-immigration rhetoric. He said he wanted to deploy U.S. military forces until his long-promised border wall is built.

“Until we can have a wall and proper security we’re going to be guarding our border with the military,” Trump told reporters at the White House, lamenting what he called “horrible” U.S. laws that left the southern border poorly protected.

Trump railed against a “caravan” of Central American migrants traveling from the Mexico-Guatemala border in the last 10 days toward the United States, journeys that have occurred annually since 2010 in an effort to draw attention to the plight of people fleeing violence in their countries.

On Tuesday night, Mexican Foreign Minister Luis Videgaray said on Twitter that the caravan “dispersed gradually and at the decision of its participants.” Mexican officials say privately that they believe Trump has exaggerated the caravan’s importance to renew pressure on Mexico over the renegotiation of the North American Free Trade Agreement.

After 14 months in office, Trump still hammers regularly on an anti-immigration theme that helped to energize conservative Republican voters who helped him win the presidency in the 2016 election. Trump took a hard line on illegal immigration during the campaign and has also sought to curtail legal immigration.

His efforts have thus far failed to produce a comprehensive overhaul of America’s immigration laws or full funding for his border wall in the Republican-led Congress. No major legislation was expected before November’s congressional elections.

His latest comments immediately raised questions in Congress and among legal experts about troop deployments on U.S. soil.

The Posse Comitatus Act, a federal law on the books since the 1870s, restricts using the U.S. Army and other main branches of the military for civilian law enforcement on U.S. soil, unless specifically authorized by Congress.

But the military can provide support services to law enforcement and has done so on occasion since the 1980s.

Under Republican President George W. Bush, the National Guard between 2006 and 2008 provided border-related intelligence analysis, but had no direct law enforcement role.

Some specific statutes authorize the president to deploy troops within the United States for riot control or relief efforts after natural disasters.

“The details really matter here,” said Stephen Vladeck, a professor at the University of Texas School of Law.

“The real question is going to be if the president is serious about this, what kind of legal arguments do we get out of the White House and the Pentagon for such a deployment.”

A senior Republican aide in the U.S. House of Representatives said key lawmakers had not been briefed on the White House plan. The aide said there was no indication that a specific plan had even been formulated yet.

Geronimo Gutierrez, Mexico’s ambassador in Washington, said he had spoken to U.S. Homeland Security Secretary Kirstjen Nielsen about Trump’s remarks on the border and that Mexico had formally asked the U.S. government to clarify them.

“It’s certainly not something that the Mexican government welcomes,” Gutierrez told CNN.

Nielsen, who took part in the meeting with Trump, said in a Twitter message late on Tuesday that she had been told by Mexican officials “the caravan is dissipating.”

At a campaign rally, Mexican leftist Andres Manuel Lopez Obrador, who is leading most polls by double digits before the July 1 presidential election, said that if the U.S. government militarizes the border, thousands of his supporters would protest by forming a “big human chain of Mexicans for peace.”

Some members of Congress said they were uncomfortable with the idea of using the military at the border.

Democratic Senator Brian Schatz said Trump should have to seek approval from Congress for any such troop deployment. “We should put that new law to a vote in the Senate,” he said on Twitter. “I predict fewer than 20 votes.”

In a Twitter post earlier on Tuesday, Trump said the caravan “heading to our ‘Weak Laws’ Border, had better be stopped before it gets there. Cash cow NAFTA is in play, as is foreign aid to Honduras and the countries that allow this to happen. Congress MUST ACT NOW!” Congress is on vacation until next week.