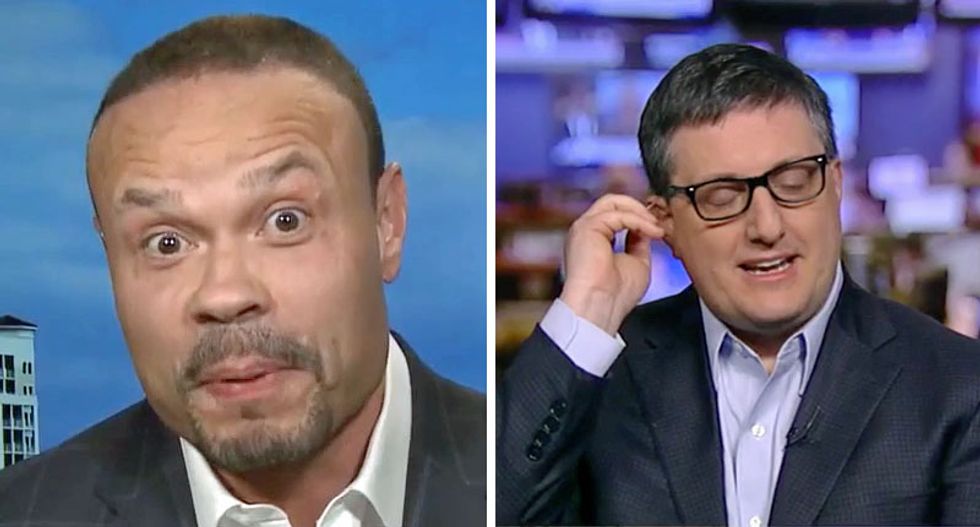 On Saturday morning's Fox & Friends, one of Ed Henry's guests attempted to communicate with the host via his earpiece when he was unable to hear over the loud ranting by far-right commentator Dan Bongino.

Bongino, who has lost campaigns for federal office three times -- in two different states -- during the last three election cycles, flipped out over the "fairytale" investigations into President Donald Trump's potential collusion with Russia during the 2016 presidential campaign.

"The Democrats with maybe a new party policy, if you can't beat them, sue them," Henry said. "The DNC filing a lawsuit against the Trump campaign, Russia, and Wikileaks, accusing all three of conspiring to disrupt the 2016 election."

"Is this really the right message for the Democrats heading into the mid-terms?" Henry wondered.

He then went on to argue that while Trump did not collude with the Kremlin, Democrats did.

"Was there a conspiracy on the Democratic side?" Henry asked former Hillary Clinton confidante Philippe Reines.

"Of course not, if the RNC wants to sue or Dan wants to sue, they should go ahead and do so," he replied.

Bongino continued his deflection, claiming, "we're talking about a lawsuit that your party is filing against the Republicans and Trump for something your candidate did."

"Here's what I know, let me talk for a moment," Reines begged.

"You know nothing!" Bongino shouted.

“I can’t hear what he’s saying, yelling over himself,” Reines explained.