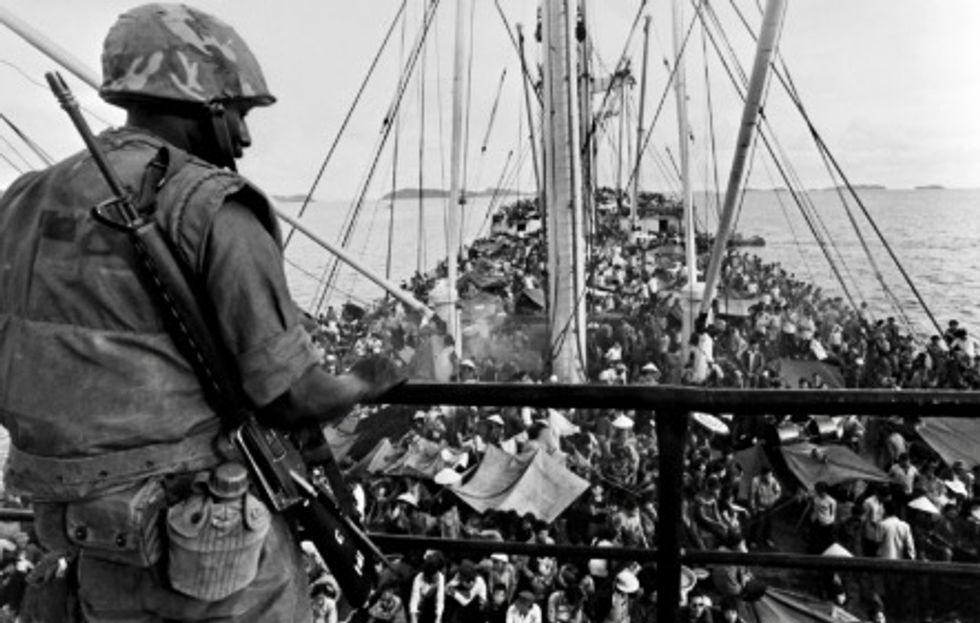 Nguyen was nine when he boarded a boat alone to escape the communist regime in Vietnam for the United States. Some 40 years later, he returned in shackles, deported from the only country he really knows to one he can scarcely remember.​

With conspiracy and fraud convictions under his belt, he was expelled in line with a Trump administration push to remove immigrants with criminal records for convictions ranging from traffic offenses to drug-related crimes and murder.

Nguyen left his four grown kids and second wife Annie behind in Boston, and now spends his days aimlessly cruising the web because he cannot find work, or battling bureaucracy to obtain identity papers.

"I still don't believe it," Nguyen told AFP in Ho Chi Minh City this week, using only his last name for safety.

"I really want to go back there because I lived there for more of my life there than here," said Nguyen, who's not yet used to the city's sweltering heat and complains of dry fried chicken at the local KFC.

The former construction worker was sent to immigration detention with orders of removal after his prison release last year, joining some 8,600 Vietnamese nationals tagged for deportation, most with criminal records.

In the 2017 fiscal year, 71 Vietnamese nationals were deported from the US -- double the 2016 figure -- and 76 have been sent so far since October 2017 according to data from US Immigration and Customs Enforcement (ICE) which does not track refugees' date of arrival to the country when compiling removal data.

The move comes as immigration officials ramp up raids and removals of aliens from Mexico, Cambodia, Myanmar and elsewhere who Trump has vowed to crack down on.

Advocates argue that the expulsion of Vietnamese nationals violates a 2008 deal that says Vietnam refugees who arrived in the US before the normalisation of ties between the former war foes in 1995 should not be deported.

But ICE says their birth nations are obligated to take them back and that it does not target immigrants "indiscriminately".

Nguyen and nearly 30 others landed in Ho Chi Minh City in December after a 24-hour flight during which his hands and feet were shackled, and he has spent the last few months uneasily settling into a city he still calls by its former name Saigon.

He says his father was shot dead by communist authorities in 1979, soon after Nguyen left his mother behind for the US where he was taken in by American sponsors for a few years.

Since his return, his elderly mother has been visited by plainclothes police asking about her son and he fears further harassment because of his family's past work with the US military.

Former US ambassador to Vietnam Ted Osius said in an essay this month he resigned last year in opposition to the "repulsive" plan.

"I think fundamentally this is racist policy," he told AFP from Ho Chi Minh City, where he is now vice president of Fulbright University.

Since many refugees sided with the US-backed South he fears they could "end up being human rights cases" in the country with a tarnished reputation for jailing critics -- including those who still pledge allegiance to the former regime.

That's what Vu Ha fears. Immigration officials in California issued his removal orders last year after he served time for burglary and he spent nearly a year in ICE custody until his recent release.

Vietnam still has not agreed to have him back, locking him in limbo between two governments that do not accept him.

"I'm just stuck right in the middle," Vu, 37, told AFP after checking in with immigration officials in Los Angeles.

He's not been back since he left at age nine and is terrified about a communist government he doesn't side with.

"There's nothing good to say about Vietnam. The government is attacking the civilians, they don't have any kind of rights as far as freedom of speech or anything," said Vu, who has a daughter about to graduate from high school.

Some who have already been deported like Bui Hung have an American parent.

Hung, who served six years in an American jail for beating his wife after catching her in bed with another man, said his American serviceman father was killed in the war and he fled with his family to the United States in 1993.

He says he now lives in fear of police in Vietnam.

There is little recourse for refugees like him and Nguyen to return to the US, though some are hopeful they may get back after Trump -- a man he says "has no heart" -- is out of office.

Until then, Nguyen will learn to ride a motorbike, the transportation of choice in his new city, and keep in touch with his wife who bid him a tearful goodbye in Ho Chi Minh City Friday after a brief visit.

"He left Vietnam as a little boy," she told AFP. "Now he doesn't know what to do."