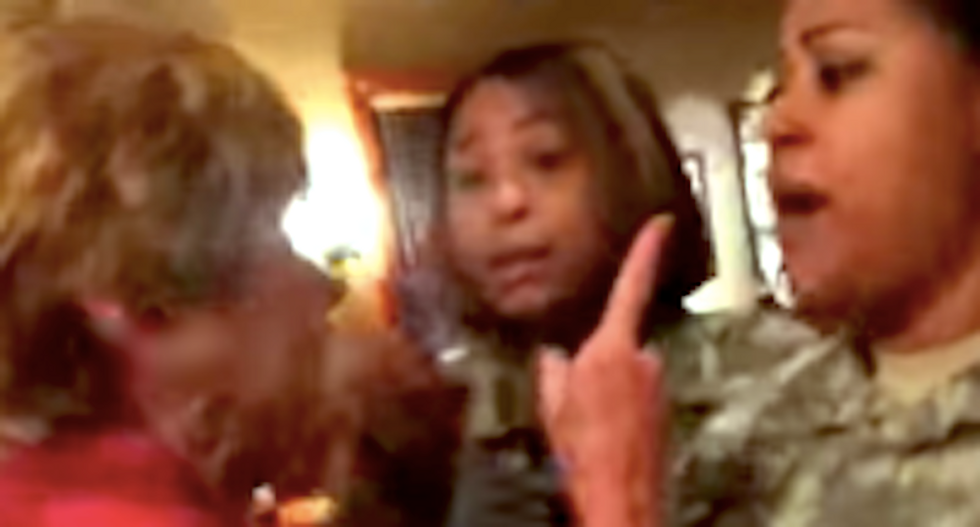 A white Georgia woman hurled racist and homophobic slurs at two black soldiers -- and then physically attacked them for recording video of her outburst.

The two uniformed women apparently angered the woman and her son outside a Cheddar's Scratch Kitchen restaurant Saturday night in Macon because they drove around her family as they attempted to park.

"This Gentleman & his mom [were] hostile about the two soldiers not waiting for them to reverse back into [their] handicap parking spot for her handicapped husband instead they went around and proceeded to park in [their] own separate parking spot," wrote witness LaKeycia Ward.

The woman, later identified as Judy Tucker, and her son Robbie followed the two women into the restaurant and called them "black b*tches" and said they didn't know the U.S. Army allowed lesbians to serve.

That's when one of the women and several witnesses started recording video, and the 72-year-old Tucker and her son tried to grab the soldier's phone.

"You do not have the right to take a picture of me," Tucker says in Ward's video. "Put that phone down."

A crowd soon gathers in the restaurant lobby and other guests tell Tucker and her family to leave.

Video recorded outside the restaurant shows Tucker's daughter Angie telling police that her mother was the victim of an assault and was bleeding.

Tucker was booked into Bibb County Jail and released on $650 bond.

She started recording because they were calling her gay Black bitches so the white lady snatched her phone and wouldn't give it back pic.twitter.com/g2rCcnOv2s